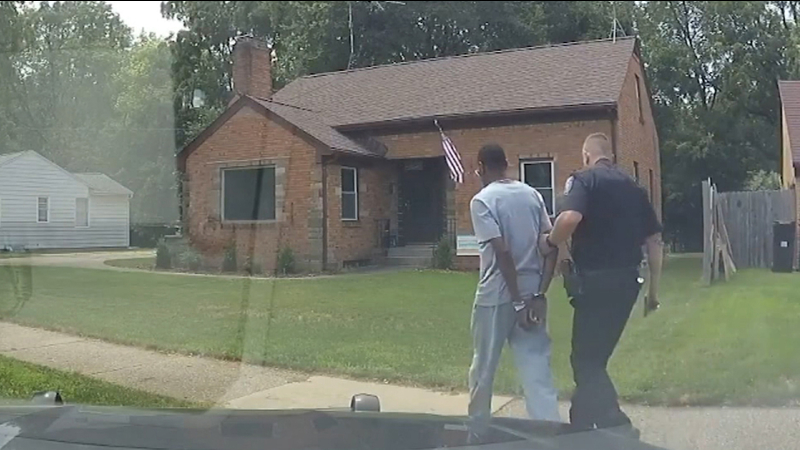 WYOMING, Mich. -- A Black real estate agent was showing a house to a Black man and his 15-year-old son in a Michigan suburb last week when they looked outside and saw police officers surrounding the property with their guns drawn.

"I knew once they surrounded the home they were preparing for a standoff," the father, Roy Thorne, told CNN's Don Lemon Friday. "And so my instincts told me we need to get out of here, we need to get to where they can see that we're not a threat."

A neighbor had called authorities, saying a suspect arrested at the property a week prior had returned to the scene, according to the Wyoming, Michigan, Department of Public Safety. But the caller was mistaken: The real estate agent, Eric Brown, was giving Thorne and his son Samuel a tour of the home in the community of Wyoming, just outside Grand Rapids, after scheduling the visit online the day before.

All three were eventually released without incident -- but not before Wyoming police ordered them out of the home with their hands up and handcuffed each of them, briefly placing Thorne and his 15-year-old son in the back seats of separate patrol vehicles, according to footage released by Wyoming police.

"I was worried," Thorne said, "but I was just more concerned about getting my son out of that situation and getting us all out of there."

Asked if he felt they had been racially profiled, Brown said, "In that moment, it certainly felt that way." He found it difficult to justify the level of force used, he said, describing it as a "tactical" response.

In a statement Friday, the Wyoming Department of Public Safety said it had conducted an internal review and concluded "race played no role in our officers' treatment of the individuals, and our officers responded appropriately."

"While it is unfortunate that innocent individuals were placed in handcuffs, our officers responded reasonably and according to department policy based on the information available to them at the time," the statement said.

The incident scared 15-year-old Samuel Thorne, who told Lemon he felt "confusion and shock and fear ... because I had no idea why they were all down there at that time."

A neighbor called the county dispatch on the afternoon of August 1, reporting that a person who was arrested at the home on July 24 had come back in the same car, according to a timeline released by the Wyoming Department of Public Safety.

In audio of the call released by Wyoming police, the caller is heard telling dispatch that a "young Black man" had been arrested the week prior for "squatting" in the house and that his car had been towed. (The police's statement said the individual was arrested for unlawful entry.)

Police said it was a different caller from the initial incident, but "the caller was aware of the previous arrest and had seen the arrested individual and his vehicle." The homeowner had asked the caller to watch the house, police said.

A few minutes later, a Wyoming officer contacted the caller to clarify that it was the same suspect and vehicle from the previous incident. The caller confirmed it was, police said, "adding that two other males showed up and all three individuals had now entered the house."

Footage from the dashboard camera in one of the officers' vehicles shows police arriving on the scene and ordering the people inside the home to come out with their hands in the air. At least two officers are seen approaching the home with their guns drawn.

The door opens and one of the men steps out with his hands raised, the footage shows. All three leave the home one-by-one, following the orders of officers, who are telling them to approach with their hands in the air. The police have each of them (Samuel Thorne's face is blurred) turn around and interlace their fingers behind their backs before an officer handcuffs them.

Officers are heard in body cam footage explaining that the house had been broken into the week prior, acknowledging this appeared to be a "misunderstanding."

Brown is heard explaining to an officer that he's a real estate agent and he directs the officer to his license inside his wallet. The officer takes Brown to the door, where the officer removes the handcuffs as the agent explains how he scheduled the visitation and entered the home.

Officers also remove the handcuffs from Thorne and his son after a couple minutes, and they're heard apologizing to Brown, Thorne and Samuel.

Two officers unholstered their firearms during the incident, per the statement from Wyoming police -- one who was moving around the property's perimeter of the house and one who was giving cover near the front.

"When responding to a reported home invasion in progress with multiple individuals inside a home, this is standard protocol," Wyoming police said in their statement.

Police Chief Kimberly Koster has reached out to Brown and offered to meet with the three of them to talk about the incident, Wyoming police said.

Brown told CNN a time has not been decided, but they want to have that conversation with the chief with their own counsel present. He added he feels its "critical" that Samuel is there, too.

"Clearly," Brown said, "we want some reform and some change here."

Asked if he had a message for the neighbor who called police, Thorne told CNN, "We're just like you. We occupy the same space. We do the same things. We go to the same places."

"And if you see a crime, report a crime. But if you see people -- Black people, any minority -- don't report people doing normal things," Thorne said. "You do that, you don't realize that you can change their life or have their life taken, just you making a phone call. In this instance, it could have been three."