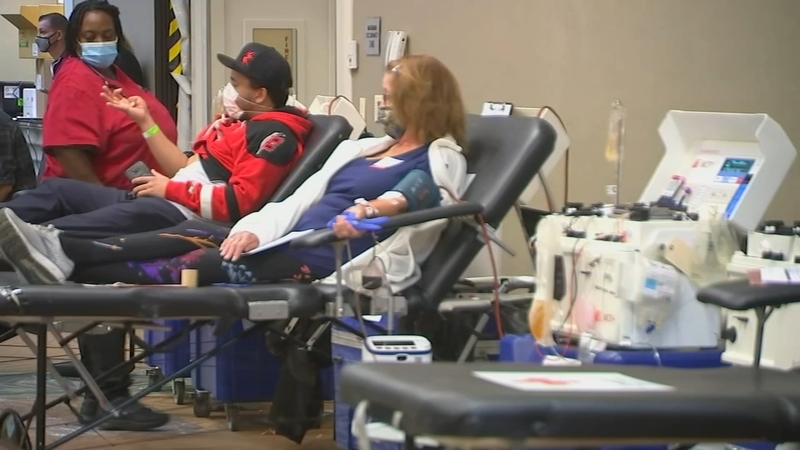 RALEIGH, N.C. (WTVD) -- 11-year-old Molly Baer was born with a rare blood disorder called Beta Thalassemia Major that prevents her red blood cells from working as they should.

But with the nationwide blood shortage, that could become a challenge.

"I worry about it every day," said Baer. "It is such a huge need; my daughter and so many of our friends would not live if people were not donating blood."

She suffers from sickle cell. Sometimes the pain feels like cuts from broken glass

"Just imagine that inside of your body. All the time. Like on a daily basis," Williams said.

Even with the national shortage, the FDA restricts gay and bisexual men from donating blood during a certain time period.

Its 2015 policy listed a time deferral of 12 months without sex before blood donations were allowed. The time period was reduced to three months in November 2020.

During an ABC11 panel last month for World AIDS Day about this issue, Meteorologist Adam Joseph at ABC11's sister station ABC 6 Philly called the FDA's rule a slap in the face.

"My husband and I have been together 13 years. And we are turned away at the door. To say that we need to not have sex or love each other in an intimate way for three months to me seems to be a very backwards and old mentality," Joseph said.

Blood donation restrictions for gay and bisexual men date to the 1980s in the early days of the HIV and AIDS crisis.

But Greece, Israel, France and the United Kingdom are among the nations dropping the restriction, and instead, gay and bisexual men now undergo an individual risk assessment.

"I feel like the state that we are in currently in America, the pandemic or just in general that everyone should be able to donate," said Williams.

Right now blood centers, including the American Red Cross, are conducting research on individual risk assessments while maintaining safe blood supplies to give to the FDA.

"We agree as an organization that blood donation should be based on things like science and not sexual orientation," said Barry Porter, regional CEO for American Red Cross in eastern North Carolina.

ABC 11 checked in with Duke and UNC Hospitals, both of whom acknowledged there is a national blood shortage but so far said they have not postponed or canceled any transfusions.