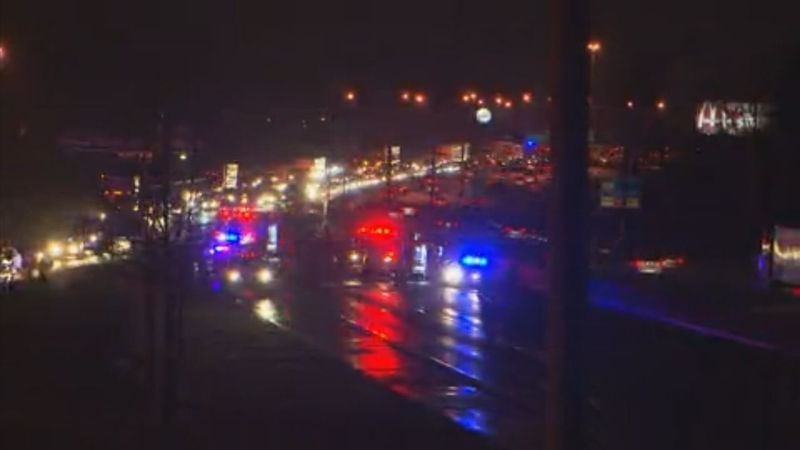 MEBANE, N.C. (WTVD) -- Over 130 vehicles were involved in a series of accidents on I-40 Sunday evening, shutting down the interstate for hours. The North Carolina Highway Patrol said 25 people were taken to local hospitals, but no serious injuries were reported.

Video at Exit 154 of backups on I-40 westbound. Cause of accidents unknown. Nine total. Troopers investigating. pic.twitter.com/wu5Znzcd0a

Expect delays on I-40 W near the Tanger Outlets exit in Mebane. Vehicle accident closed one lane of traffic. #ABC11 pic.twitter.com/SQGCMa7tzE

The Highway Patrol said the first accident involving 25 vehicles happened around 5:45 p.m. in Graham. Troopers said heavy rain and fog combined with people driving too fast for the conditions contributed to causing the crash.

As emergency workers tried to clear the first crash, drivers coming in the other direction slowed down and other vehicles collided with them.

There were a total of nine accidents, seven going west and two going east on the interstate from exits 147 and 153 in Alamance County.

Woman reacting to traffic backup on I40 w. pic.twitter.com/zsluAHCvM8

HAPPENING NOW: Highway I-40w is now open at exit 152. Traffic is moving. No word yet on cause from Highway Patrol. pic.twitter.com/KT2WJRfkMD