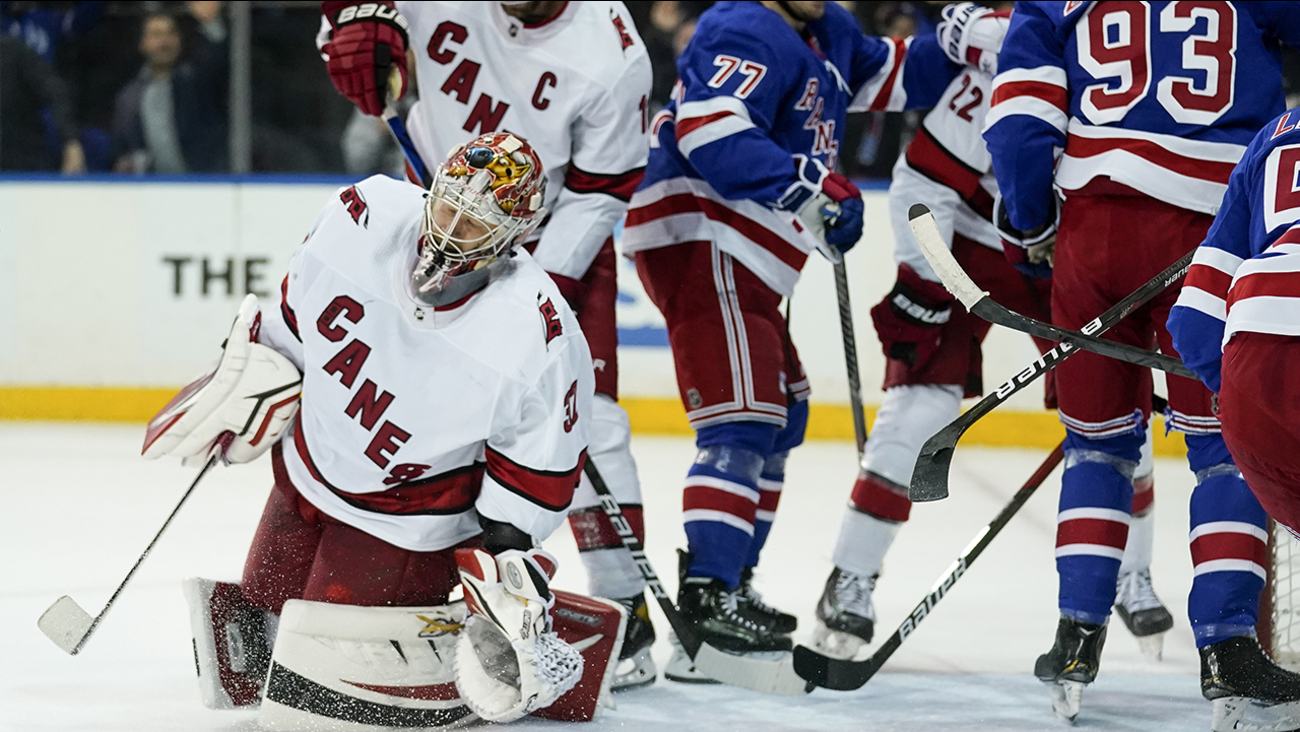 NEW YORK -- The Carolina Hurricanes still can't find a way to win on the road.

Andrew Copp had a goal and two assists, and Frank Vatrano and Adam Fox each had a goal and an assist as the New York Rangers beat the Hurricanes 4-1 in Game 4 on Tuesday night, evening the second-round series.

Mika Zibanejad also scored, Ryan Lindgren had two assists and Igor Shesterkin stopped 30 shots for the Rangers, who won their fifth straight at home in the postseason. In the series, New York won two at home after opening with two losses at Carolina.

Teuvo Teravainen scored and Antti Raanta finished with 24 saves for the Hurricanes, who fell to 0-5 on the road in the postseason to go along with their 6-0 mark at home.

Game 5 will be Thursday night at PNC Arena in Raleigh. The puck drops at 7 p.m. Game 6 is at Madison Square Garden on Saturday.

The Rangers have won two straight against the Hurricanes after losing eight of the previous nine meetings, including a three-game sweep in the qualifying round of the 2020 playoff bubble and three of four in the regular season.

Teravainen spoiled Shesterkin's shutout bid when he scored his third of the playoffs at 6:33 of the third off a pass from Sebastian Aho, pulling the Hurricanes within 3-1.

Copp restored the Rangers' three-goal lead as he converted from the right side off a pass from Ryan Strome with just under nine minutes remaining. It was his fifth of the playoffs.

There was more pushing and shoving between players in the closing seconds of the game, with the Rangers' Ryan Reaves and Carolina's Max Domi being separated by officials as they exchanged words.

Shesterkin made a sprawling save on a shot by Teravainen that deflected off the skate of Rangers defenseman K'Andre Miller about two minutes into the second period, preserving New York's 2-0 lead.

Carolina got its first power play midway through the second period, but couldn't convert. About a minute into the Hurricanes' advantage, the Rangers had a 2-on-1, short-handed chance but Raanta made a sprawling save on Zibanejad. Forty seconds later, Martin Necas fired a shot that got past Shesterkin but hit off a goalpost to keep Carolina off the scoreboard.

The Rangers pushed their lead to 3-0 with 3:12 left in the middle period as Zibanejad brought the puck up the ice on a rush, and dropped it off for Lindgren. The defenseman fired a shot that Raanta stopped, but as the puck trickled through his pads, Zibanejad swooped in behind him and knocked it in for his fifth of the playoffs.

Shsterkin made a spectacular glove save going from right to left on Brett Pesce 1:20 into the game on the Hurricanes' first shot on goal, drawing a big roar from the home crowd that was buzzing even before the puck drop.

Alexis Lafrenire took the puck away from Carolina's Jordan Staal, skated in on a breakaway, but Raanta denied his backhand attempt at 3:44.

The Rangers were unhappy with a fight that broke out at the end of Game 3 on Sunday between Lindgren and Domi. New York coach Gerard Gallant was also seen yelling at Hurricanes defenseman Tony DeAngelo.

In this one, Rangers defenseman Jacob Trouba delivered a hard hit on Domi along the sideboards as the Hurricanes forward was falling to the ice. Carolina's Steven Lorentz skated into Trouba and the two dropped gloves with 8 1/2 minutes left in the first. Lorentz drew 10-minute misconduct and a minor for instigating in addition to the fighting majors he and Trouba received.

The Rangers took advantage of the ensuing power play as Vatrano got a pass from Copp in the right circle and fired a one-timer past Raanta with 6:29 left. It was his third of the playoffs.

Fox made it 2-0 just 2:11 later as he deflected a shot by Lindgren from the top of the left circle past Raanta.

Minutes later, DeAngelo - the target of several derisive chants from Rangers fans in the opening period - and Reaves were separated as they were jawing at each other.

Aho got his 26th career postseason assist, breaking a tie with Ron Francis for the most in franchise history. His 44th postseason point moved him past Eric Staal into sole possession of the top of the franchise scoring list.

The Rangers were 1 for 4 on the power play and are now 2 for 11 in the series. They are converting 27% in the postseason. The Hurricanes finished 0 for 2 to fall to 0 for 9 in the series. They are at 11% in the playoffs.
Report a correction or typo
Related topics:
sportsnew yorknhl playoffsnew york rangerscarolina hurricanes
Copyright © 2022 ABC11-WTVD-TV/DT. All Rights Reserved - The Associated Press contributed to this report.
TOP STORIES
Dangerous heat with possible severe storms could bring damaging hail
Toddler and man killed in Raleigh apartment shooting, woman hurt
Gas prices decline in Raleigh but experts worry about meaning of dip
Sticker shock for young would-be renters as apartment leases spike
Highland Park parade shooting suspect bought 5 weapons despite threats
Carlos Santana collapses during Michigan concert
Man dies hours after shooting at Raleigh gas station
Show More
Grandfather of woman shot by Fayetteville police searches for justice
What to know if your flight gets canceled or delayed
Raleigh City Council adopts 'social districts' ordinance
Raleigh woman recovering, arrest made in San Diego shooting
Couple fined $1,500 for parking in own driveway
More TOP STORIES News