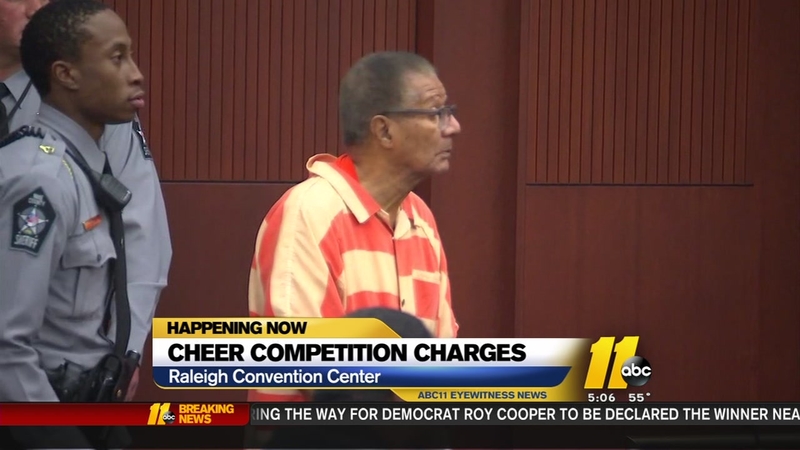 Elderly man charged with indecent liberties at a cheerleading competition

RALEIGH (WTVD) -- An 81-year old Cary man who attended a weekend cheerleading competition in Raleigh is accused of inappropriately touching a teenager.

Raleigh police said they found Herbert Anderson was at the Raleigh Convention Center on Saturday afternoon where the competition was being held and charged him with taking indecent liberties with a child after a 13-year old reported the incident.

Monday afternoon, when Anderson faced a judge for the first time, a prosecutor laid out the case.

She said the girl was standing near the stage and rooting for a fellow cheerleader when Anderson rubbed his pelvis against the girl's buttocks twice.

A father from Virginia who attended the competition witnessed Anderson being arrested.

Although he didn't want to be identified, the father spoke with ABC11 by phone Monday.

"I'm very surprised. I was shocked actually. Shocked," he said. "I couldn't imagine somebody just coming up with the nerve at 81 years old. It's possible he could have been getting away with this and other minor stuff under the radar for years. Who knows?"

ABC11 checked court records and found no other arrests or convictions for Anderson.

Still, Raleigh police ask that anyone who has information about this case or the suspect to contact them.

Anderson said his wife, who shares a Cary townhouse with him, is trying to hire a private attorney.

He asked that the judge lower his $15,000 bond but the judge refused.