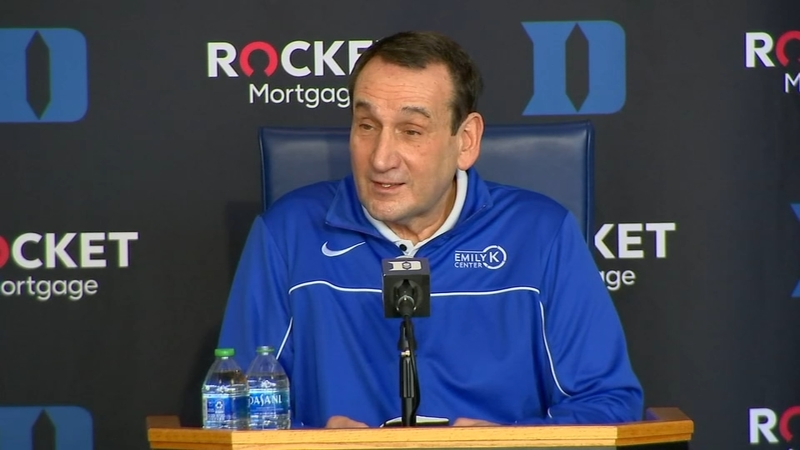 Krzyzewski admits to reflection as his final home game nears

DURHAM, N.C. (WTVD) -- On Saturday night, Cameron Indoor Stadium will be rocking -- just like it always is on game day. The score will be of the utmost importance with North Carolina on the other bench, as it should be. For the remaining hours leading up to tipoff, and once the clock hits zero, it's all about Coach K.

On a Saturday in November, 42 years ago, Mike Krzyzewski made his coaching debut at Duke inside Cameron -- a win over Stetson. Krzyzewski says he doesn't remember that first game. His last will be unforgettable for many.

Not one to spend much time on the past or the future, Krzyzewski admitted that his mind has gone there this week.

"A little bit of thinking yesterday, your last game in Cameron," he said. "Like, it's crazy. How did that happen? How is it here?"

Krzyzewski said he'll have to have a talk with himself to clear his emotions so that he can focus on the job at hand.

"Who would have ever thought it's my senior day? I won't be concerned with me using up all my energy in warmups," he joked.

Spiritually and emotionally, the 75-year-old is ready for the next chapter.

"I'm ready," Krzyzewski said. "Believe me, there is no thought in my mind. Like, I won't be at games. Where would I sit? I'm not going to hover."

Every single player who Krzyzewski coached at Duke was invited to the final game. Close to 80 former players will be back for the celebration. That includes ESPN broadcaster Jay Bilas, who will have a tough time keeping emotions in check.

"You know, you can't deny the emotion that goes with this," said Bilas, who played under Coach K from 1982-1986. "For me and for others in my position that have played for him or coached under him, it would be kind of foolish to do that. I think you want to take in the experience."

Despite all the attention on him, Krzyzewski says there is a game to win and wants his players to be focused on that.

His Blue Devils have already whipped the Tar Heels once this season, an 87-67 thrashing on Feb. 5 in Chapel Hill. Now ranked fourth in the country, Duke seems to be peaking at the right time, having already clinched the top seed in the ACC Tournament and riding a seven-game win streak.

Still, in the end, it's all about the game -- and the players who will forever be part of the lore.

"There is so much about me, but the moment is about us," Krzyzewski said. "I want them to understand it's about us. It feels like we're going to coach against Carolina and we got to win. I mean that's the mindset if you're able to push emotion off the plate."

His wife, Mickey, and their three daughters are handling the post-game gatherings that will take place Saturday night and Sunday morning.

Krzyzewski said he wouldn't be here without the strength of his four women and the support of his wife.