His 'CODA' co-star Marlee Matlin was the first.
OTRC 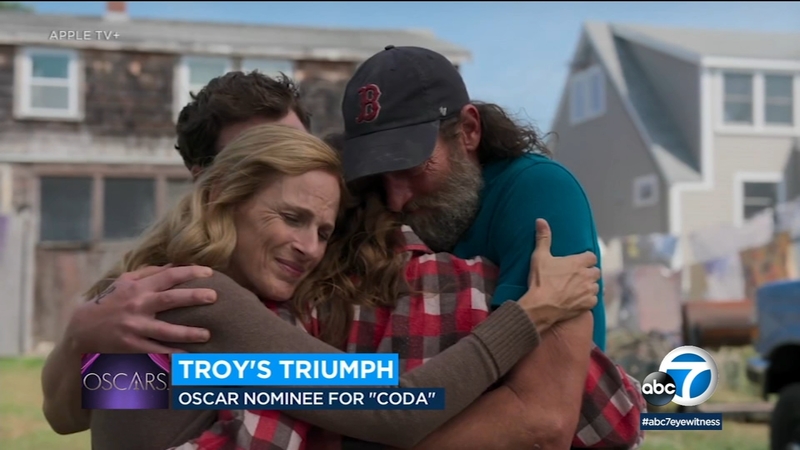 LOS ANGELES -- In 1987, Marlee Matlin made history as the first deaf actor to win an Oscar for her role in "Children of a Lesser God."

At the time, it felt like a major breakthrough, but Matlin has since said "the focus moved away" as nominations didn't follow for other deaf or other disabled actors.

"I feel like I have dust that's been on my back that finally is starting to become clean. I feel a bit lighter," he said of his nomination. "This chip is off my shoulder and yes, it is a historic moment. It just really, it'll be documented. Even after I leave this planet, it'll still be documented in the history books. And so it's truly a blessing."

"CODA" -- titled after the acronym for "child of deaf adults" -- is a coming-of-age film that follows the Rossi family as they argue over the fate of their fishing business. Kotsur and Matlin portray the parents of Leo and Ruby, the sole hearing member of the foursome.

It's one of several projects released in the last year to star deaf actors and skirt stereotypical deaf stories. Lauren Ridloff stole scenes as a speedster superhero in Marvel's "Eternals," and Millicent Simmonds helped defeat monsters in "A Quiet Place Part II."

Their deafness isn't always central to the plot, but when it is, those storylines are handled with care and nuance -- because, in most cases, they were developed with the help of deaf consultants and experts of American Sign Language (ASL).

Troy Kotsur, star of CODA, makes history as the first deaf actor to get an individual Screen Actors Guild nomination.

People with disabilities have long been among the least represented groups in film and television. In 2020, USC Annenberg's inequality report found that only 2.3% of all speaking characters across the 100 top-grossing films of 2019 were even depicted with a disability, much less played by an actor with a disability.
Of the nearly 30 Oscar wins for portrayals of characters with disabilities, only Matlin and Harold Russell in 1946's "The Best Years of Our Lives" actually had one.

In an interview with On The Red Carpet, Kotsur said he hopes Hollywood can continue to tell diverse stories in collaboration with diverse groups of people.

"There are so many stories to tell from the deaf community," he said. "It's important Hollywood remains open-minded."

The Academy has nominated 581 films for the Oscars' best picture award. Here's a look at the few that made history.