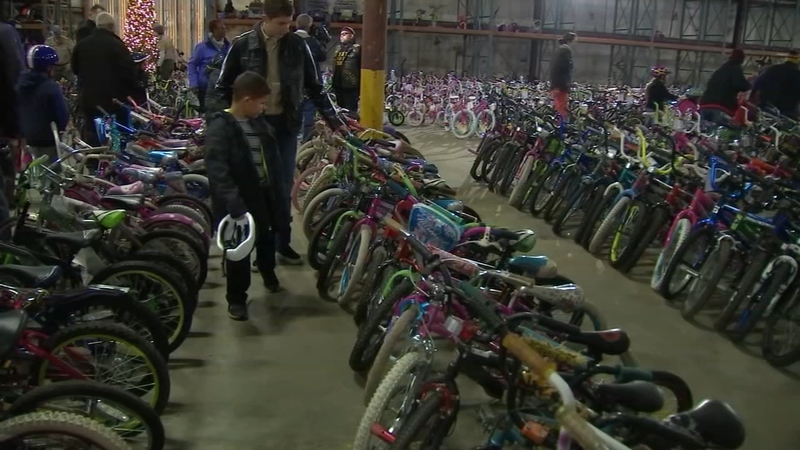 On Saturday, 1,500 bikes of various sizes and colors formed aisles inside that brought broad smiles to many young faces.

"Step right up and get your brand new bike," said Jermaine Hopkins, an actor whose film credits include "Lean on Me" and "Juice." He's one of the volunteers who guided the children through a sea of bicycles provided by the organization headed by Ann Mathis.
Nearly 30 years ago Moses Mathis, her late husband, came up with the idea of turning donated, used bikes into Christmas presents for children whose families faced economic challenges.

His widow said on Saturday, "I'm hoping he's looking down and saying, 'Ann, you did it girl!' 'Cause he was always the one in the forefront and I was in the back."

"To be part of a program like this, where kids can just come and get whatever bike they want, may be less fortunate, whatever their situation is," said Hopkins. "It's just a great honor and I look forward to it every year."

Ann Mathis told us this could be the first chance for some children to make a big decision that will affect their lives without direct advice from their parents.

"The only thing the parents can do is bring 'em in, check 'em in, and then they have to go outside. The kids, along with the volunteers, choose their own bikes."

She says after ten moths collecting donations of bikes, money and in-kind contributions from the corporate community, "Oh, their smile on their faces means everything in the world to them! Like the little girl who was the first one to get her bike? Some of these kids, this may be the only thing that they get for Christmas."