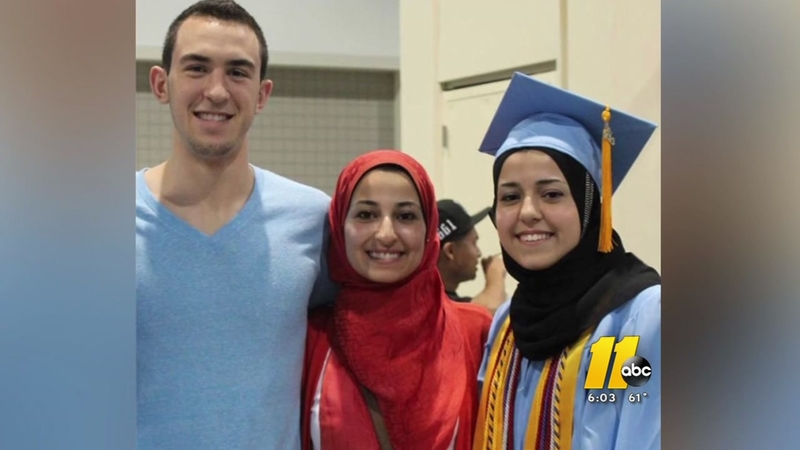 RALEIGH, North Carolina (WTVD) -- Saturday the community came together for a day of mourning and tribute for three Muslim-American college students shot and killed-exactly three years ago.

Deah Barakat was a second-year dental student at UNC-Chapel Hill. His wife Yusor and her sister Razan, both attended NC State before their murder.

The women's father, Muhammad Abu-Salha accused the alleged killer, Craig Hicks, for carrying out an act of hate.

"It's sad sometimes that it takes a tragedy to wake people up to the facts," said Abu-Salha. "Terrorism is not Islam. And Terrorism has no faith. Terrorism can mask behind any face."

Chapel Hill investigators said Hicks shot and killed his neighbors because of a fight over parking.

Since then, through the Lighthouse Project, located in historic downtown Raleigh, the community has learned about Deah, Yusor and Razan's philanthropy. From helping the homeless to supporting scholarship and Syrian refugees.

It's a legacy the victim's family say they work tirelessly to keep fresh on people's minds.

"They symbolized to all America and our community..unknowingly and knowingly, spontaneously and naturally how a Muslim/American should live," said Abu-Salha.

This week, Congressman David Price made a declaration on Capitol Hill to honor their lives-as reminder the fight persists to combat racial and ethnic prejudice in America.

"America has no place for anti-Muslim bigotry," Said Price. "Let alone violence or murder. It is simply un-American in the most profound possible way."