WTVD
By Heather Leah
There's something iconic about drive-in theaters that sticks in our cultural collective memories.

Once a roaring industry, they're now a reminder of by-gone days, proof that even our most popular pieces of pop culture can someday rust by the roadside.

Today, shopping centers like The Tower and Tarrymore Square leave nearly no trace of the drive-in memories left behind. The only clue to their former life is the quintessential pie-slice shaped lots, fanning out from a single point, where the screen once stood.

In the glory days of drive-ins, parents would pack a carload of rowdy children and carry them into the show for a steal.

Some of Raleigh's popular drive-in theaters included the Tower Drive-in, open from 1950 to 1975, and the Forest Drive-in, which also closed in the mid-70's.

The Forest's location has been a subject of some debate in recent years. Many people remember the original location from its grand opening in 1949 on North Boulevard, which later became Capital Boulevard. The beltline was built directly through the Forest's original location, and the Forest was moved down Capital Boulevard to where it intersects with New Hope Church and Buffalo Road. After the drive-in closed, Tarrymore Square developed on the lot. You can still see the evidence in the pie-slice shape of the lot when viewing the land from above.

The Forest Drive-in featured a merry-go-round and even occasional pig races. Many Raleighites remember sipping Pepsi on the hood of their parents' car or sneaking through the woods to watch the movies for free.

Open until 2007, the Starlite was a darling of the Durham community, restored and jazzed up by Bob Groves, who had a passion for drive-in theaters. While the golden era of drive-ins began fading in the 1970's, Bob Groves bought the Starlite in 1987, and it enjoyed tremendous community support. 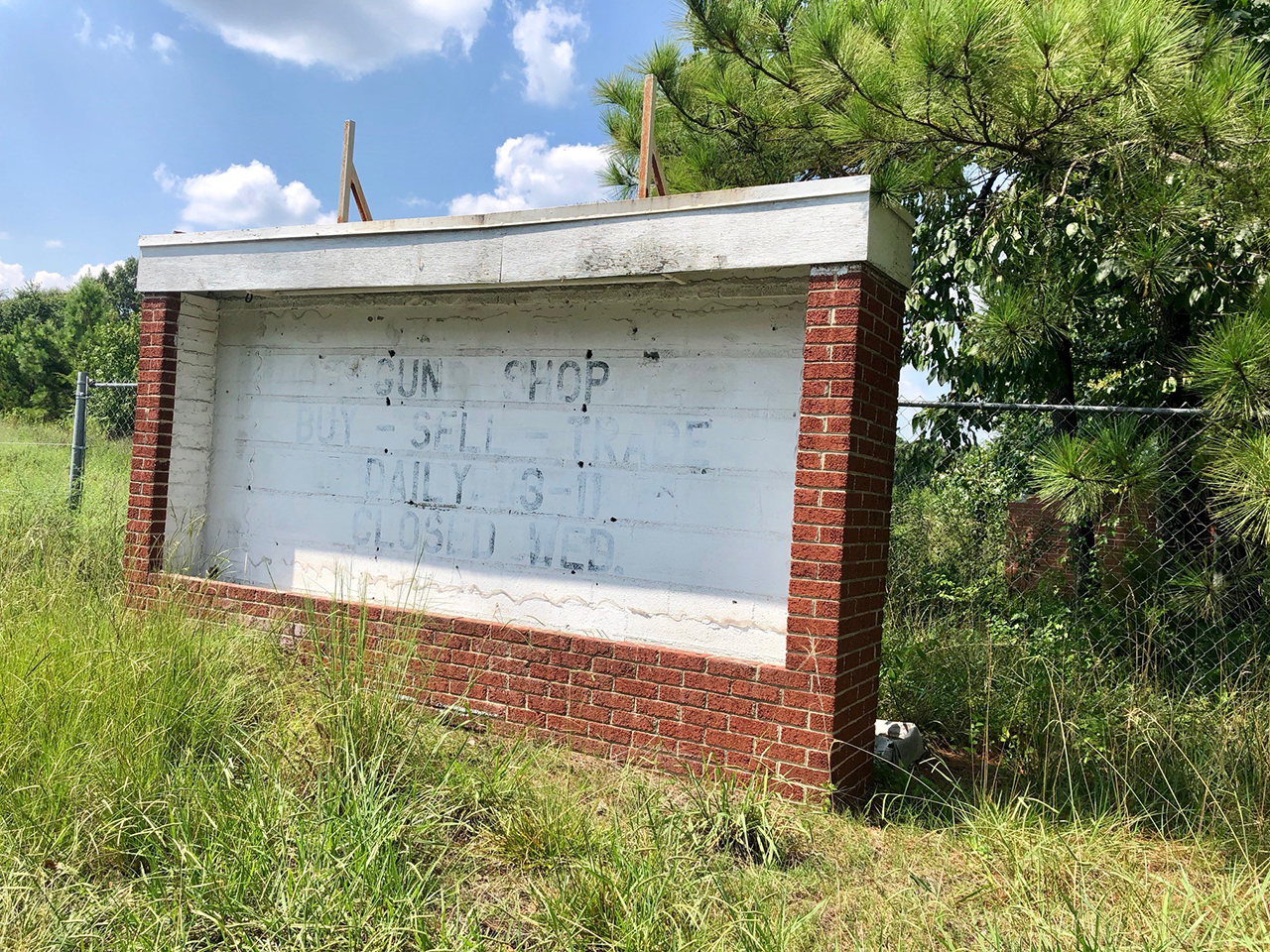 When a fire destroyed it in 2004, Durhamites banded together to raise money for its restoration. However, when Bob Groves died suddenly in 2007, the Starlite closed. Left abandoned for years, its iconic marquis still sits on the highway, with faded black letters staining the background like a message from ghosts of a former life.

Behind the Starlite marquis, barely visible through overgrown grass and a chain-link fence with a "NO TRESPASSING" sign, a small, faded white building with no door is all that remains of the theater. It seems to be the concession stand. Marred by graffiti, the years have not been kind to the abandoned Starlite theater.

Like the Starlite, Cairo Dive-in, located in modern-day Fuquay-Varina, was abandoned for many years, with scavengers picking apart the bones. Cairo was also a beloved community drive-in, owned by James Bullock, was a smaller operation. Whereas Raleigh's theaters could hold over 400 vehicles, Cairo's capacity was only 250. For years, the rusted metal sign stood like a totem to its history. People feared vandals would destroy or steal it. 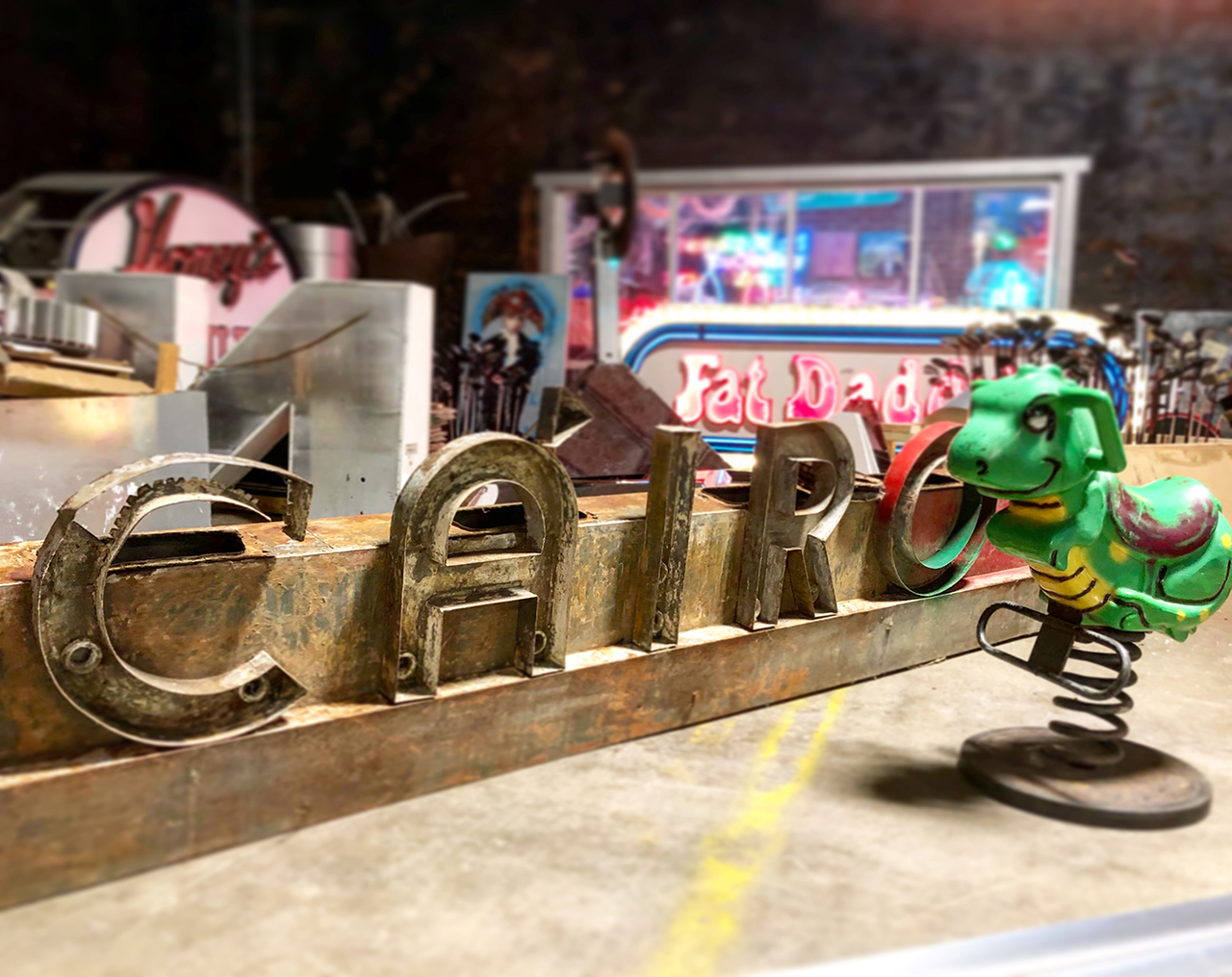 Fortunately, the Cairo's sign was bought and preserved by a local artist who collects antique signs. It was last seen on-display in Raleigh, alongside a vintage playground toy from the same theater.

Street names like Cinema Drive, Showtime Drive, and Box Office Street are the only remaining hints that a piece of cinema history once stood here.

It takes a special kind of passion to fight the tides of culture and keep an entire industry alive.

Although drive-ins began losing popularity in the 1970s, certain unique individuals like Bob Grove have a passion for keeping this classic entertainment alive for future generations. Mark Frank, who owns Raleigh Road Outdoor Theater, the oldest operating drive-in in North Carolina, has that same passion. Like Bob Groves, Frank says the drive-in industry is in his blood.

For families who still enjoy watching movies under the stars, or for grandparents who want to share a piece of their youth with grandkids, that work is appreciated.

"The 1950's was the heyday of drive-ins. There were over 4000 across the country," explains Frank. Back then, classic cars were new, and people wanted to show them off." Given America's love affair with classic muscle cars, drive-in theaters doubled as car shows. While many of North Carolina's drive-in theaters closed in the 1970's and 80's, "up North, where I grew up, drive-ins are actually still pretty popular," explains Frank. When he moved to North Carolina, he knew he wanted to manage a drive-in and keep the classic tradition alive down South.

Frank was actually looking to buy the Cairo Drive-In, but the Moon-Glo in Henderson caught his eye instead.

"When I bought it, it was literally about to close. It was in such disrepair," he says.

Craig Askew, who has worked at the Raleigh Road Outdoor Drive-in for over 12 years, and whose uncle was a projectionist when the Moon-Glo, its previous incarnation, opened in 1949, says, "Trees were covering the screen. The movie was literally showing on tree limbs. There were three or four cars here on any given night. One previous owner literally bought it on Ebay."

But Frank took over, and like the renewal of the Starlite, his passion brought it back to life.

Visiting the Raleigh Road Outdoor Theater is like driving into a piece of history. The impressive screen towers over the traditional playground, complete with vintage playground equipment like a set of faded bouncy horses. With a classic marquis and vintage movie posters, the boldly-painted red and white concessions stand gives a glimpse of how the faded remnants at the Starlite would have looked. 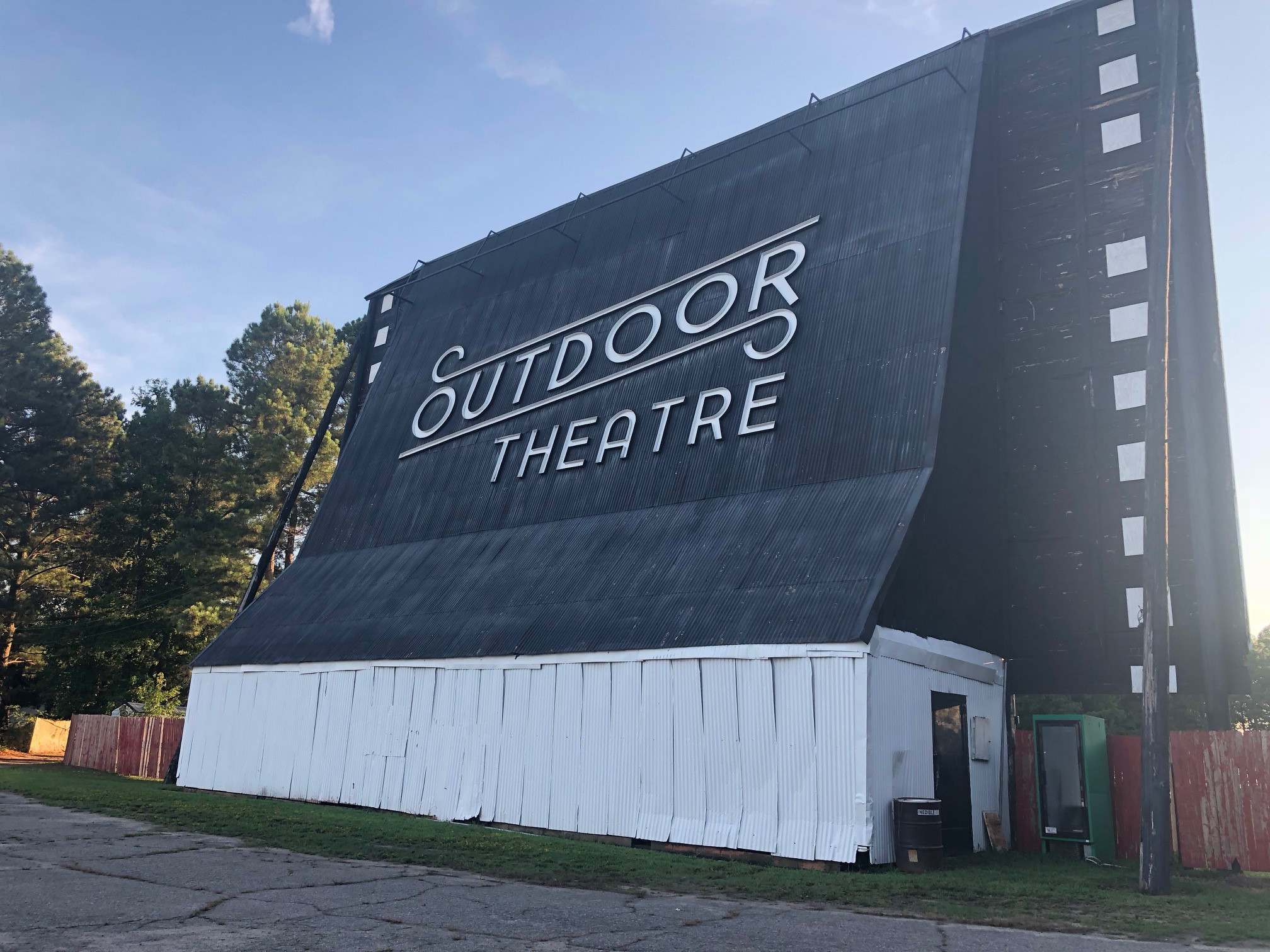 "The screen is still in the same spot," explains Askew. "We kept it exactly like it was in the 1940's, except with a new coat of paint and new name. The ticket booth is in the same spot."

"In the 1980's the sign glowed neon and said Moon-Glo," Askew describes. "The first film ever played here was Ali Baba and the 40 Thieves."

Today, the Raleigh Road Outdoor Theater serves up a mixture of modern movies like The Meg and old-time favorites like Jaws. "Drive-ins have a lot of benefits. We won't offer wi-fi; we try to give the kids a break from video games and the internet. Instead, the kids can play in the field or the playground. Families have picnic dinners under the stars, and we allow pets," says Frank. "Sometimes we see shooting stars and rainbows over the screen. Sometimes we have bouncy houses, or slip-and-slides. We encourage people to bring baseball gloves and frisbees."

All-in-all, Frank says he's trying to give this generation of kids the same classic memories as kids who grew up in simpler times.

Why did drive-in theaters disappear?

"When the VCR was invented," says Frank, "People started wanting to stay in and watch movies at home. But also, around the 1970's and 80's, the original owners started to get old and pass on. A lot of times, their kids didn't want to take on the family business, so the drive-ins just started disappearing."

On top of that, property values began increasing, often driving owners to sell the land. There's a popular saying that everywhere you see a Walmart, there used to be a drive-in.

As those theaters gasped their final breath, the new era of drive-in movies began as family-friendly nostalgia, with places like the Starlite and Raleigh Road Outdoor Theater.

Of course, not everything is the same as in the 1950's. Instead of scratching your car door on a rusty metal speaker jutting out of the ground, attendees now tune in to a radio station to hear movies. Technology has enhanced the experience, but Eskew fondly recalls some of the older days, saying, "I miss the sprockets and the wheels, and the distinct sound of the shutter flipping." Some of that classic cinema magic can't be re-created.

But watching a movie while drinking a Pepsi on your parents' hood on a muggy summer night-- that's a memory that can be re-created again and again.

Raleigh Road Outdoor Theater is North Carolina's Oldest Operational Drive-In. You can learn more about them on their website or by visiting their Facebook page.