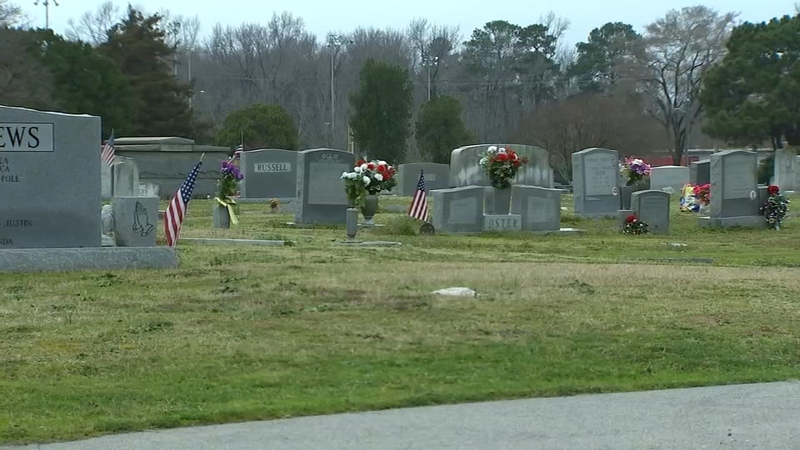 FAYETTEVILLE, N.C. (WTVD) -- A historic Fayetteville cemetery is getting an upgrade in the coming months to deal with severe flooding from the Cape Fear River.

FEMA and the state of North Carolina joined to help the city pay for this pricey project with a newly approved $7.8 million grant.

Damon Hickmon, the Cemetery Supervisor, has seen what major flooding can do.

He describes how close one burial site came to being flooded during Hurricane Matthews and Florence.

"It got to within maybe ten feet from the top," said Hickmon. "There used to be trees standing along here. All that trail that you see down that way, completely underwater."

Those close calls and signs of erosion became a wake-up call for the city, pushing them to find some sort of solution.

Hickmon says that preventative measures will now come in the form of a retaining wall near the river bank to stop floodwaters; however, that also entails the movement of 250 burial plots and caskets to another site in the cemetery.

For the last year, crews have been slowly transferring those caskets to their new burial site. In that time, they saw their fair share of positive and negative reactions.
"More concern on why we couldn't reach out to everyone and let everyone know that it's happening," Hickmon added.

The cemetery supervisor says it's difficult to contact every single person affected, so they made the announcements online and through the local newspapers.

"A lot of these spaces were purchased through the funeral homes, so I don't even know who these families are," Hickmon said.

According to the Department of Homeland Security, Fayetteville was approved for more than $7.8 million in reimbursements. The large sum of money will reimburse the city for the stabilization of the riverbank, along with relocating the 250 final resting places.

FEMA's total share for the Cross Creek Cemetery project is more than $5.8 million, while the state's share is more than $1.9 million.

The DHS says more than $12 million has been approved for the city of Fayetteville to reimburse Hurricane Florence-related expenses.

So far, the city says they've transferred around 200 caskets to their new area.

City officials hope to transfer the rest over by next week, barring any poor weather conditions.