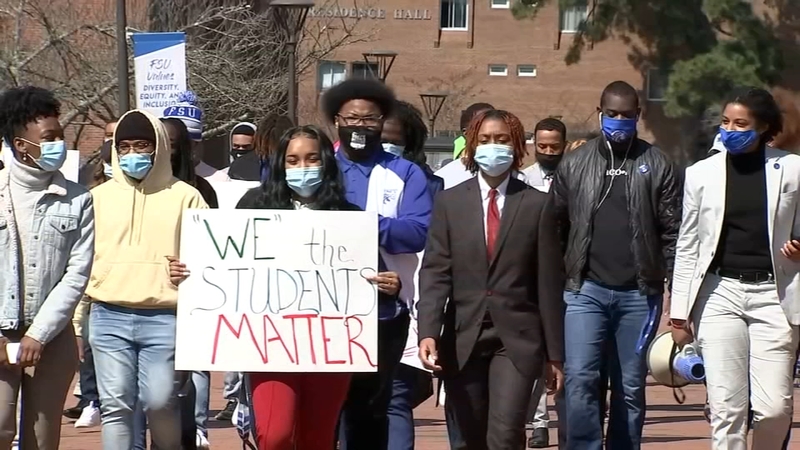 FAYETTEVILLE, N.C. (WTVD) -- The controversial selection of Darrell Allison has spilled over into the student body at Fayetteville State University.

On Friday afternoon, more than a dozen students gathered on campus for a march and speech about the selection process and other matters they would like to see addressed by the N.C. Board of Governors and FSU Board of Trustees.

Chancellor-elect Allison was officially selected on February 18. Soon after, alumni started questioning his pathway to the seat and his ability to beat out other more qualified individuals.

Some alumni quickly put together an online petition, demanding Allison be removed from the position. As of March 5, it's garnered more than 2,300 signatures.

Meanwhile, last week, the Faculty Senate at FSU held an open session where they passed six resolutions, one of those echoing the petition's demand.

ABC11 has also learned that Allison's mother-in-law, Brenda Timberlake, was a member of the FSU Board of Trustees. We later confirmed that Timberlake had resigned on February 17, the day before Allison's selection; however, board members tell us Timberlake recused herself from the entire process.

ABC11 spoke one-on-one with Allison on Tuesday. There, he responded to the backlash saying, "The accusations and attacks, if you will, are personal. A little bit hurtful when it comes to my family," later on saying, "I'm a leader, and I bring good strong leadership."

Fayetteville State University Chancellor-Elect Darrell Allison said he is a "leader," something that the university needs right now.

Harris said she and other members of SGA have spoken with Allison, expressing their concerns and sharing the vision they have for the historically black university.

In addition to having more input in the selection process, FSU students want to see more equitable funding for Historically Black Colleges and Universities.

"No secret that our HBCUs, especially within the UNC System, are underfunded and that needs to change," Harris said.

Other demands include a focus on campus safety and increase pay for HBCU staff and faculty.

"The decision to appoint him is a channel we need to use to get all other's decision to include our input," Harris added.

"Fayetteville State University supports the right of students to express their views through marches and other forms of peaceful gatherings, and I plan to work closely with the student leaders to understand and address their concerns."