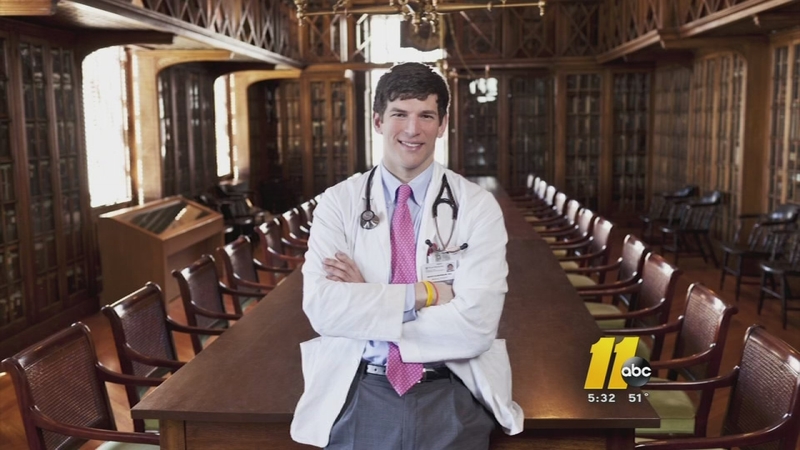 Doctor in race against time

PHILADELPHIA (WTVD) -- Looking at family photos, it appears David Fajgenbaum has it all: A medical degree and an MBA from the University of Pennsylvania, a beautiful wife, and a job that keeps his creative juices flowing.

But then there are other pictures that tell a much different story - one of a rare and deadly disease with no cure.

"Right now, we're fighting really a mysterious enemy and it's very difficult to fight something when you don't know what you're fighting against," Fajgenbaum explained.

David has a condition called Idiopathic Multicentric Castleman Disease. It causes his immune system to attack his major organs. It has a name, but what experts don't know is what causes it or how to stop it.

"Right now, it's estimated that there's 5,000 new cases a year of Castleman Disease in the U.S. which would make it as rare or as common as ALS," David explained.

David had his first episode with Castleman's as a third-year medical student which landed him in the ICU. Four other near-death relapses and chemotherapy would follow.

"Flu-like symptoms early on, my lymph nodes begin to enlarge and pretty soon my organs start to fail, so my liver my kidney and my bone marrow shut down, so when that happens that's not compatible with life," David recalled.

In fact, his family was told to say their goodbyes.

"The second one was the closest I came to death," said David. "That's when I had my last rites administered to me in November of 2010."

Though David has a medical degree, he doesn't treat patients due to his condition, but works as a researcher on the faculty at Penn in the Hematology/Oncology division. It's there in his lab where David puts in long hours hoping for a breakthrough. His research is published in the medical journals Blood and JAMA Dematology. David is determined to figure out why his immune system goes into overdrive and how to prevent it. That determination is nothing new - just ask his sister Gena Combs who lives in Raleigh. She knew from the very beginning 'Dave' was something special.

"He's so kind. He's so compassionate and empathetic, and he's able to relate to any situation and anyone that he's with. And he has the ability I think to make whoever is with him at the time feel so special," she said.

It's a gift Gena says he got from their mother Anne Marie Fajgenbaum. She passed away from a brain tumor in 2004. In 2006, David started National Students of AMF which stands for Ailing Mothers and Fathers. It's also his mom's initials. The non-profit supports grieving college students.

"She was the ultimate role model for me and I learned so much from her about overcoming adversity and trying to be the person that I am today," said David.

David watched his mom battle cancer. Now, the fight is his. He co-founded the Castleman Disease Collaborative Network or "CDCN" which brings together some to the most brilliant minds in research and volunteers to join the fight for a cure. The CDCN isn't using the typical approach of waiting for researchers to find them but rather recruiting the best people for the job - making the most of their time and money.

"We've now gone around the world and we're specifically recruiting the top experts to do each one of our studies," said David.

For now, David's treatment consists of daily medication and monthly infusions. And even while he's being treated he's working. When we met him he was meeting with his mentor and former Penn med school dean Dr. Arthur Rubinstein who can't say enough about David's efforts.

"He's interacted with people all over the world, including pharmaceutical companies, not for profit organizations, universities, medical school scientists and physicians to try to bring the best knowledge they have to further our understanding a treatment of this very serious problem," said Rubinstein.

The "problem" stands between David and the future he dreams of with his wife Caitlin.

"I want to have kids and I want to do a lot of things and in order to do those things we've got to knock this disease out," he said.

David refuses to use the term borrowed time but says right now he's in overtime and still very much in the game. With Castleman's, there's a 65 percent five-year survival rate. It's been five and a half years since David's diagnosis. He wants to find a cure - not just for himself but for everyone waiting and depending on his research.