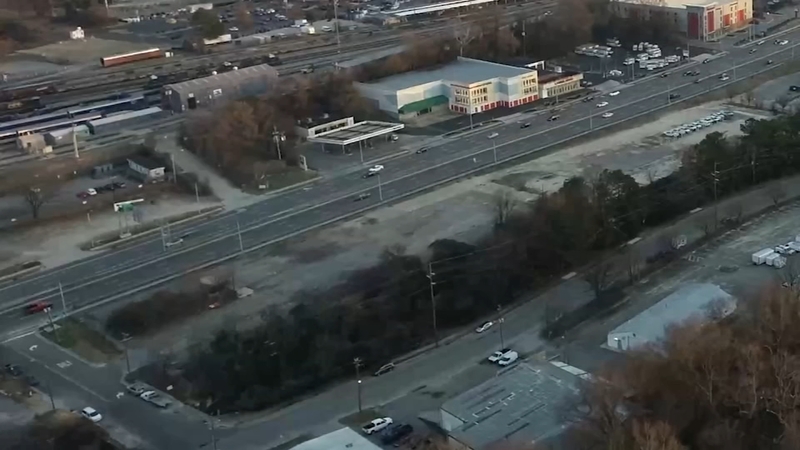 RALEIGH, N.C. (WTVD) -- The City of Raleigh wants public feedback on a plan to transform the northern gateway to downtown, turning 14 acres of surface parking and city maintenance facilities into a green space complete with a water feature meandering through the length of the park.

The proposed Devereux Meadow Park project is at the site of what was once the Devereux Meadow baseball stadium at the intersection of Peace Street and Capital Boulevard.

The concept design for the park relocates the existing stream, Pigeon House Branch, which flows along the western edge of the property, to the very center of the park while incorporating plazas, public art, and interpretive elements that would narrate the site and neighborhood history.

Right now, it’s not much to look at. The 14 acres of surface parking and @RaleighGov maintenance facilities along Capital Blvd. and Peace St. just north of downtown could one day be Devereux Meadow Park with a centrally-located stream, boardwalks, Greenway, and plazas. Thoughts? pic.twitter.com/CcB8dV9CyF

Claiborne said the project could cost upward of $18 million and that funding, which would cover design, permitting, and construction could come from a future parks bond if the city council decides to include it on the ballot and voters approve it next fall.

Until March 9, the public can provide feedback on the proposal.

"I can imagine how vibrant that was when the ballpark was there so it would just be cool to bring something like that back once again," said Jason Howard, one of the owners of The Cardinal on West Street.

Nearby business owners weigh in on the proposed Devereux Meadow Park project.

Howard and other local business owners invested on West Street years ago in hopes that someday their properties would overlook an adjacent green space.

"This corridor has always had a soft spot in my heart," said Michael Iovino, owner of August Construction Solutions. "Everybody is waiting for this park to actually come to fruition."

Howard and Iovino are hoping plans to include the multi-use greenway path inside the future park would keep the City from moving forward with plans to install a bike lane on West Street, which they believe would limit street parking and create an obstacle for potential customers to access their businesses.

If the project were to move ahead without any delay, Claiborne said it would take at least five years and remediation of soil and groundwater contamination before the 14-acre plot of paved space could become the inviting public park.

Howard and Iovino are willing to wait.