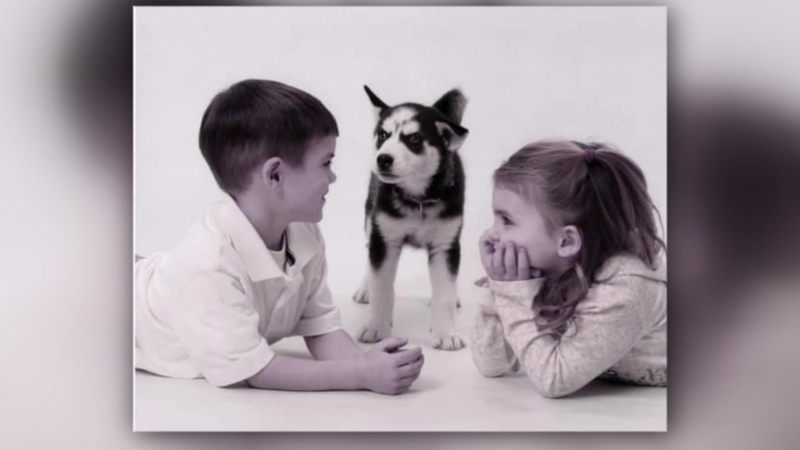 Dog returned to Angier family after being stolen 4 years prior

ANGIER, N.C. (WTVD) -- A family husky named Nukka, which had been missing from an Angier family's household for nearly four years, was returned safely to the family back in November of 2018.

The Hart family were at a dance competition when it all started. They got a phone call from their neighbor saying the front door of their home was open, and their dog Nukka was missing.

After nearly 4 years missing, a family from Angier has their dog back... it’s a bizarre story with disappearing missing posters and unbelievable letter. Their story tonight! @ABC11_WTVD #abc11 pic.twitter.com/CNEo2ppswO

When they got home, Josh Hart and his wife Rachel, along with their four children, started creating missing posters and posting to social media in hopes of finding the blue-eyed beauty.

"I just prayed she'd come back," said Owen Hart, the oldest of the Hart siblings.

Soon, though, the Hart's started noticing something strange about the missing posters they'd worked so hard to put up: they were disappearing.

"Within a week, we noticed the signs were coming down," Josh Hart said.

Soon after the signs started disappearing, the Hart's received a letter, not postmarked, in their mailbox. The letter said that Nukka was dead and the family should move on.

Neighbors agreed, the letter was odd. But, despite the Hart's best efforts, Nukka was nowhere to be found. She'd not been sighted. Her microchip had never been scanned.

As the years passed, the Harts sought closure. Eventually, they moved to Angier, but kept Nukka's chip information updated, hoping it would one day lead her home.

Then, in November of 2018, nearly four years after Nukka disappeared, there was a knock on the door. Behind it, an officer with Fuquay-Varina police.

"He said 'do you have a dog that came missing?'" said Rachel Hart. "He actually used the word stolen... I just put my hands over my mouth and I said 'husky'... we said husky at the same time."

Sure enough, Nukka, who the Hart family had come to accept may never be in their home again, was alive and healthy. With Nukka's disappearance solved, questions were answered.

The Harts said police told them that a woman had confessed to everything. To keeping Nukka instead of giving her back, to pulling down the missing posters, and to writing that letter that left Rachel in tears.

The woman, whose identity is unknown to the Harts, also attempted to disguise the husky with a black stripe down the middle of her face. That stripe is now starting to fade.

"It was like a story you see on TV," Rachel said. "How could this happen to us?"

The Harts said police informed them that stealing a dog is a felony, but they opted to not pursue criminal charges. They said they're just happy Nukka's home and was cared for during her time away.
Report a correction or typo
Related topics:
angieranimaldogdogs stolen
Copyright © 2021 WTVD-TV. All Rights Reserved.
TOP STORIES
Cooper urges NC businesses to make workers mask up or get vaccinated
Detroit Pistons take Cade Cunningham first in the NBA Draft
Federal workers required to get vaccinated; military may be next
Fayetteville couple says broken wedding venue A/C was 'unbearable'
Teen bitten by what is believed to be a shark at Wrightsville Beach
Vet tech shortage could spell trouble in pet emergencies
Show More
Heat Advisory issued for central NC ahead of high temps on Friday
Johnston County school board makes masks optional for students, staff
As COVID cases increase, demand for testing also going up in Triangle
Dozens of COVID-19 cases across the US linked to NC summer camp
Fort Bragg soldier dies at underwater training school
More TOP STORIES News