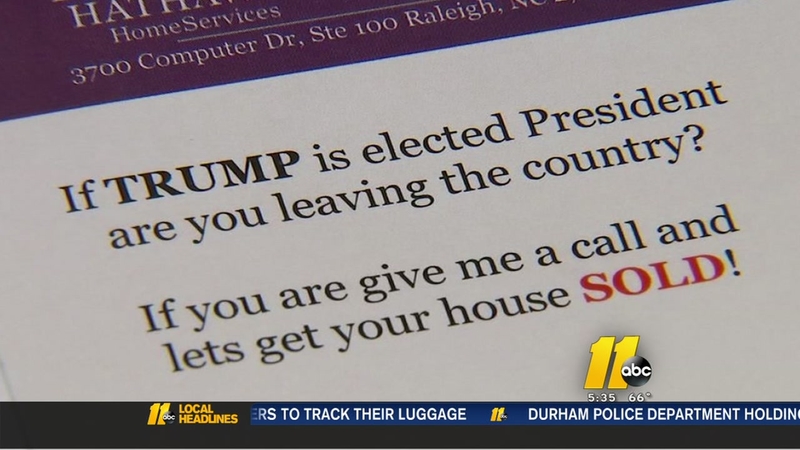 RALEIGH (WTVD) -- Raleigh realtor Will Wofford regularly sends out postcards to advertise homes he's selling, but his most recent ones have drawn the most response.

Each mailer says, "If Trump is elected President are you leaving the country? If you are, give me a call and let's get your house SOLD."

The Berkshire Hathaway Home Services realtor and his 8-year-old daughter Carleigh Ann printed and sent out 1,500 postcards to neighborhoods in the North Hills area.

"You've gotta have some fun with your postcard and you've got to catch attention or else it's just going to get thrown in the trash, bottom line," he explained.

Other realtors across the country are using similar ads, perhaps sparked by this: According to a Google Trends tweet, searches for "How to Move to Canada" were higher than at any point in Google's history after Donald Trump won seven states on Super Tuesday.

The postcard stood out to Rebecca Antonelli, an independent who ran a marketing company for 25 years. She took a picture of the mailer delivered to her house and posted it on her Facebook page.

"I've heard so many people say if Trump wins I'm going to move out of the country," she said. "It was brilliant. It really is. Using a timely event like this to get attention for your company or for yourself is brilliant."

But not everyone thinks this is good marketing. Wofford says he's gotten at least one email from a Trump supporter who wasn't amused.

"That person was offended by the postcard and told me it was the stupidest postcard he's ever seen," said Wofford. "That I should definitely fire my marketing person."

But the marketing is working in Wofford's favor. He says he's already gotten a listing and a buyer from it.

"I love it. It's working. I'm selling real estate," he said.

Wofford says he's sending more postcards. He says he'll take out the wording about Trump but that they'll have a political theme. Though he's not telling us what it is just yet.