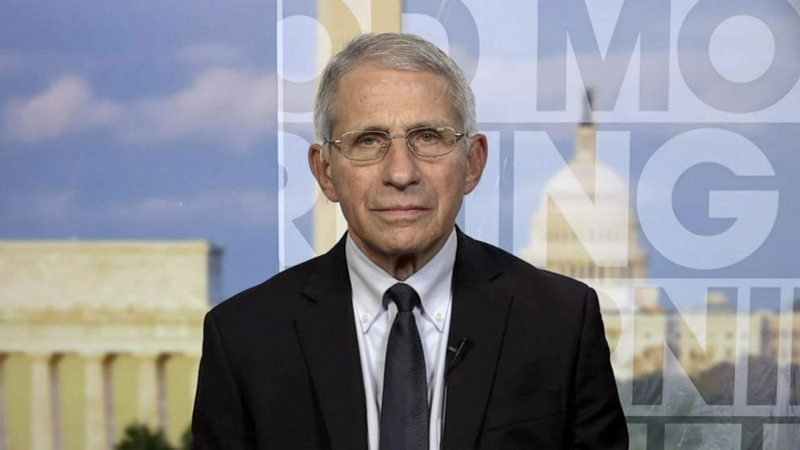 Fauci: US 'may sooner or later get another variant'

If more Americans don't get vaccinated, there is "ample chance" of another coronavirus variant emerging, one that could be more aggressive and more pervasive than the delta variant, Dr. Anthony Fauci warned Wednesday.

"If another one comes along that has an equally high capability of transmitting but also is much more severe, then we really could be in trouble," Fauci, the nation's leading infectious disease expert, said in an interview with McClatchy.

"People who are not getting vaccinated mistakenly think it's only about them. But it isn't. it's about everybody else, also," said Fauci.

With unvaccinated Americans driving the country's latest surge, experts have stressed that the more the virus continues to spread, the more opportunities it has to mutate -- making it more likely that another variant, which could pose a problem to vaccines, could arise.

"If we don't crush the outbreak to the point of getting the overwhelming proportion of the population vaccinated, then what will happen is the virus will continue to smolder through the fall into the winter, giving it ample chance to get a variant which, quite frankly, we're very lucky that the vaccines we have now do very well against the variants -- particularly against severe illness," said Fauci.

The delta variant is continuing to spread in the U.S., but the FDA approval for the Pfizer vaccine is possibly weeks away.

"We're very fortunate that that's the case. There could be a variant that's lingering out there that can push aside delta."

Roughly 57.9% of the US population has received at least one Covid-19 vaccine dose, according to data from the US Centers for Disease Control and Prevention. Roughly 49.7% of the population is fully vaccinated, the data shows.

At the current pace of vaccinations, it will take until mid-February to get at least one dose of Covid-19 vaccine to all eligible Americans, according to a CNN analysis of CDC data.

More than 90 million eligible people in the US are still unvaccinated. And though the seven-day average of people initiating vaccination each day is the highest it has been since July 4 at 446,300, many experts say the US is still not where it needs to be to get the pandemic -- and the rapidly spreading delta variant -- under control.

"When you look at the curve of acceleration of seven-day averages of cases per day, it is going up in a very steep fashion," Fauci said in the McClatchy interview.

On Tuesday, for the first time since February, more than 50,000 hospital beds across the country were occupied by Covid-19 patients, according to new data from the US Department of Health and Human Services. That number is more than triple what it was a month ago.

"We are not crying wolf here. This surge that we're going through right now has every potential to be -- and already looks to be -- the worst surge we've faced so far," former US Surgeon General Dr. Jerome Adams said during a live online interview with The Washington Post on Tuesday.

"Things are getting worse:" Jonathan Karl interviews Dr. Anthony Fauci on "This Week."

Fauci said earlier this week that he would like the US to be at upwards of one million vaccinations per day.

With the spread of the delta variant, it might not be possible to stop the spread of coronavirus completely, National Institutes of Health Director Dr. Francis Collins said Tuesday.

"But we could still get to a place where this becomes a nuisance instead of a threat to your life."

The delta variant now accounts for an estimated 93.4% of coronavirus circulating in the United States, according to figures published by the CDC.

This includes several sub-lineages of delta, all of which are classified as variants of concern. Together, they made up about 93.4% of cases during the last two weeks of July.

This number is even higher in certain parts of the country, including the region that includes Iowa, Kansas, Missouri and Nebraska, where delta accounts for more than 98% of circulating virus.

These figures have shown a rapid increase over the past two months. In the two weeks ending May 22, for example, delta's prevalence was estimated around 3%.

At that same time in May, another variant first identified in the UK -- Alpha, or B.1.1.7 -- was the dominant one in the US, causing 69% of cases. Now, CDC's most recent estimates put that variant at just under 3%.

Although experts have said data so far does not indicate a need for the general population to get vaccines boosters, Fauci said there is an effort underway to get them for immunocompromised people.

"Those individuals we know almost invariably do not have an adequate response, so the need to give them an additional boost is much more emergent than the general population," Fauci said during a virtual event hosted by Virginia Gov. Ralph Northam on Tuesday.

Vaccine advisers to the CDC have met to discuss whether immunocompromised people may need additional protection from a vaccine booster but have not yet presented a formal recommendation or voted on guidance.

Dr. Anthony Fauci is "cautiously optimistic" that children younger than 12 will be eligible to get a COVID-19 vaccine by Thanksgiving, he said on CNN on Thursday.

"We are trying very hard to get the regulatory mechanism in place very soon to get those individuals a boost that might bring up their immunity to the level where it should be, if possible," Fauci said.

During a discussion hosted by the Center for Strategic and International Studies on Tuesday, Fauci said it's "very likely" Covid-19 variants evolved in the bodies of those who are immunosuppressed.

People with immune suppression may be unable to fight off Covid-19 infections for weeks or even months, meaning the virus has plenty of time to evolve and change.

"Variants, we all know, have emerged because of the pressure that the human immune system has put on the virus, very likely from people who are immunosuppressed ... and had virus in them for days and days and days before they cleared it and/or died, and then essentially led to the emergence of a variant," Fauci said.

'Substantial' increase in cases among children and teens

With the new school year stirring concerns about protecting children from Covid-19, the American Academy of Pediatrics said Tuesday there's been a "substantial" increase in cases among children.

Nearly 72,000 children and teens caught Covid-19 last week -- five times as many as at the end of June, the group said.

The definition of a child varies by state, but generally includes those up to age 17 or 18.

Covid-19 protocols vary across the country, but when children go back to school, districts will need to know how to respond to outbreaks quickly.

Districts need to be prepared to enact contact tracing, testing, the quarantining of people who were exposed to the virus and the isolation of people with infections, Dr. William Schaffner, a professor at Vanderbilt University School of Medicine and medical director of the National Foundation for Infectious Diseases, told CNN.

"From what we understand, it does depend on what district you are in. The district should have very well thought-out outbreak plans that have included the voices of educators and parents and community members in the crafting of those plans, and they should have plans that follow the CDC recommendations," Anderson said.

"Our recommendation to all students and school districts is to follow the medical experts and follow the CDC," she said.