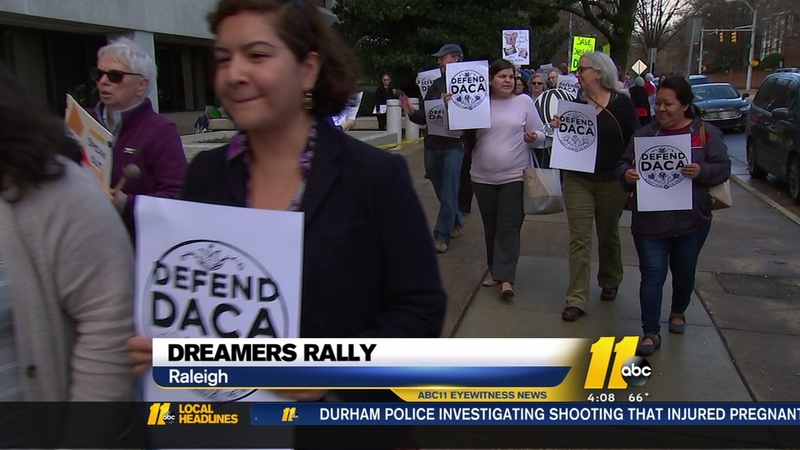 The current legislation ends in less than two months.

"Will I go back to a country where I'm not that great at the language, where I don't know everything, where I don't really have family? I have a grandmother, but that's about it," said Gonzalez. "It's starting life all over again and I've worked for so long to build what I have here, and it's terrifying, it gives me anxiety."

Tillis was not in Raleigh for this rally. He was in Washington, DC on Tuesday.

The protest in downtown Raleigh comes one day after a heated day on Capitol Hill.

Tillis' office said in a statement:

"Senator Tillis has been a leader in offering a merit-based solution for the DACA-eligible population, introducing the SUCCEED Act last year. Senator Tillis looks forward to continue working with his Republican and Democratic colleagues on a DACA-border security compromise that will be signed into law."

Undocumented families feel they became a bargaining chip in a political game.

Republicans and Democrats are hoping to reach a DACA deal by February 8, when the temporary spending plan signed Monday night by President Donald Trump expires.

Trump tweeted Tuesday: "Nobody knows for sure that the Republicans & Democrats will be able to reach a deal on DACA by February 8, but everyone will be trying....with a big additional focus put on Military Strength and Border Security. The Dems have just learned that a Shutdown is not the answer!"

A look at the letter El Pueblo is delivering shortly to @SenThomTillis. I’m waiting for comment from his office, but the senator tweeted out yesterday, “It's time to move forward and continue discussions for DACA/Border Security.” #abc11 pic.twitter.com/gVxE7JMIzt

While lawmakers work toward a resolution, the community group El Pueblo said families are living in fear.

"It just breaks my heart to see little kids who are coming home getting off the bus wondering if their parents are going to be home because of everything that is going on," said El Pueblo Community Organizer Iliana Santilla-Carillo. "The whole situation is definitely very chaotic not just for the students who benefit from DACA, but also from the families who have nothing else."
Report a correction or typo
Related topics:
politicsraleighwake countyimmigration reformthom tillisdacarally
Copyright © 2022 WTVD-TV. All Rights Reserved.
TOP STORIES
LIVE COVERAGE: Snow, ice accumulating across NC
NCSHP reports 200 crashes statewide, urges drivers to stay home
Why do we get freezing rain instead of snow or sleet?
How to drive on snow, ice and get out of a skid
CLOSINGS: List of businesses, churches closed Sunday
Expect more worrisome COVID variants after omicron, scientists say
After Biden's first year, the virus and disunity rage on
Show More
Novak Djokovic leaves Australia after court rejects visa challenge
Ukraine claims Russia behind cyberattack in 'hybrid war'
Hostages in N. Texas synagogue 'out alive and safe,' Gov. Abbott says
Man shot, killed by officer at Duke University Hospital
AMBER Alert canceled for missing Durham 9-year-old boy
More TOP STORIES News