DURHAM, North Carolina (WTVD) -- Grayson Allen put on a show in his final season opener for No. 1 Duke. So did Marvin Bagley in his first - and perhaps only - one.

Bagley had 25 points and 10 rebounds in his college debut, and Duke opened another season of high expectations by routing Elon 97-68 on Friday night, moving Hall of Fame coach Mike Krzyzewski one victory from yet another career milestone.

Basketballl coach Mike Krzyzewski reflects on 999 wins at Duke after the win against Elon.

"We've been working in the summer, practicing and going in the weight room, we were doing all this stuff for this night right here," Bagley said. "To come out and show the world what we can do with this great team we have. We just have fun, man, we share the ball well, we come out in attack mode."

Duke shot 55 percent - 71 percent while pulling away in the second half - and held the Phoenix to less than 40 percent shooting while looking the part of a team beginning a second straight season atop the AP Top 25 .

One of the tallest Duke teams in school history - this is just the program's fourth with an average height of at least 6-foot-7 - outrebounded the smaller Phoenix 48-30 while also forcing them into 11 consecutive missed shots during an early, tone-setting 17-0 run. 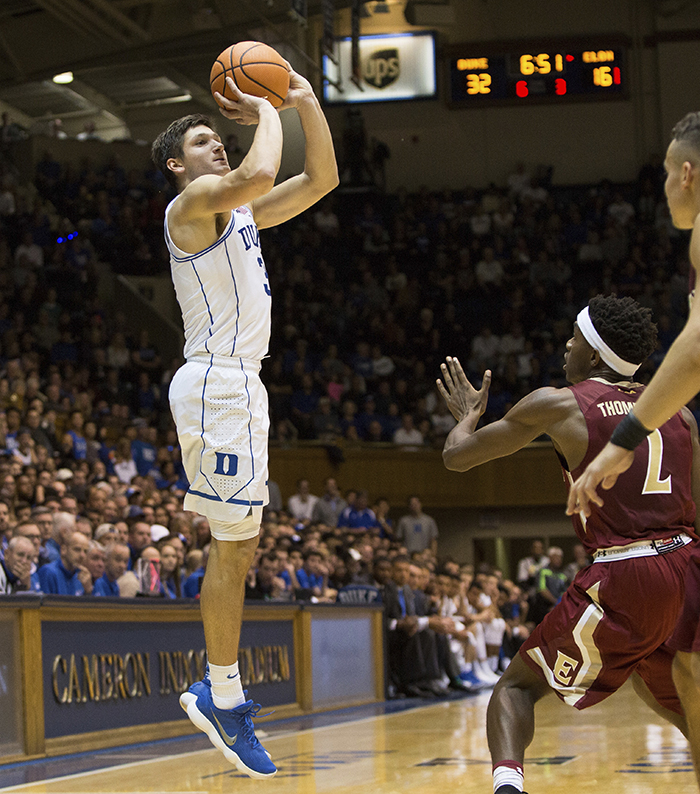 "When they have (6-10 forward Wendell) Carter and Bagley both in the game, for us, it's incredibly difficult to guard because we're guarding one guy and they throw it inside to the other," Elon coach Matt Matheny said. "And that leaves the opposite big with a free lane for an offensive rebound."

Coach K had no trouble earning his 999th career victory at Duke. The winningest coach in men's Division I history has 1,072 victories in a 43-season career that also includes five years at Army.

Elon: There's no shame in losing at Cameron Indoor Stadium - no non-Atlantic Coast Conference team has won here since 2000. Elon has four starters back from a team that went 18-14 a year ago and led the Blue Devils at halftime of their trip-dominated game in Greensboro. The Phoenix missed 22 shots in the first half but rebounded just two of those while falling behind by 20, and were never in the game after that.

Duke: The Blue Devils return only one player (Allen) who averaged more than three points or 8 minutes last season, and didn't have their second-most important returnee - big man Marques Bolden (strep throat) was on the bench in street clothes. Krzyzewski said Bolden wouldn't play Saturday night and "I don't see how he could play by Tuesday" against No. 2 Michigan State in Chicago.

Duke started four freshmen - Bagley, Trent, Carter and Trevon Duval - for the first time since the Johnny Dawkins-Mark Alarie class in 1982-83 made 23 starts. Speaking of his young teammates, Allen said he "didn't think they looked nervous to start the game at all."

At times it was hard to tell this was Bagley's first college game. The star freshman originally was part of next year's recruiting class before reclassifying to get a jump start on his college - and, presumably, pro - career. The potential one-and-done forward was 12 of 18 from the field and his length gave Elon problems all night. The only quibbles: Bagley was 1 of 4 from the free-throw line - and was the only Duke player to earn a trip to the stripe until midway through the second half.

There were a few to choose from. Duval's alley-oop pass to Bagley midway through the first half sent the Cameron Crazies into delirium. But the topper might have been Bagley's two-handed, down-the-lane jam with the shot clock winding down and about 10 seconds left before halftime. That made it 45-25 and put Duke up by 20 to stay.