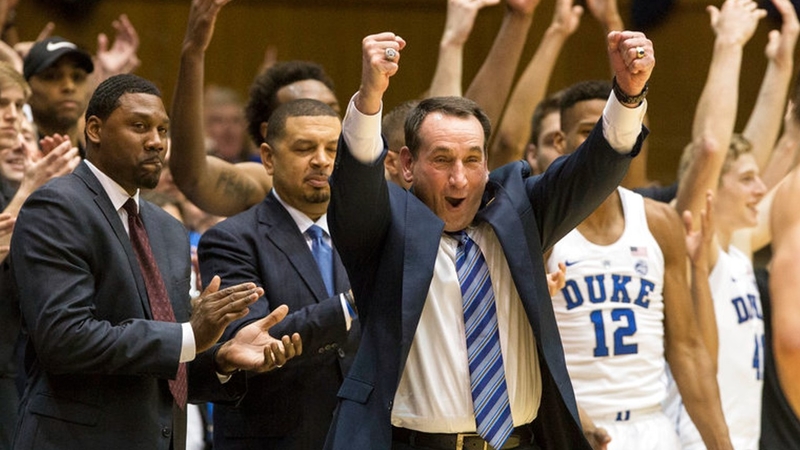 The Duke Blue Devils take the court against rival North Carolina Tar Heels with tip off scheduled for 6 p.m. on ESPN.


The pageantry surrounding the game is impossible to miss: Coach K has been the topic of nearly every sports broadcast locally and nationally all week; students started camping out at Krzyzewskiville on Jan. 23; Coach K himself held a pep rally in Cameron Indoor Stadium.

But what drives this rivalry is not the pageantry. It's the quality of basketball and the high stakes that always come with the game.

The Blue Devils (26-4, 16-3) clinched at least a share of their first ACC regular-season title since 2010 with Tuesday's win at Pittsburgh, then secured their first outright title since 2006 with Notre Dame's loss to Florida State on Wednesday.

The Tar Heels (22-8, 14-5) are in a different position as they close their first regular season under Hubert Davis, the former UNC and NBA player who took over for retired Hall of Famer Roy Williams last April.

They spent most of February trying to shore up a shaky NCAA resume, which features a lack of high-end wins while they generally avoided losses to teams they should beat. More problematic is the fact that the Tar Heels have not only lost, but been blown out of multiple measuring-stick games such as No. 7 Kentucky (by 29 points) and No. 13 Tennessee (17), as well as in league play at Miami (28) and Wake Forest (22).

The 87-67 loss to the Blue Devils stands out considering how Duke jumped to a 31-8 lead and had UNC fans fleeing for the exits in their own building with roughly 5 minutes left.


Those are the things that are on Davis' mind more than the spectacle of Krzyzewski's home finale.

Beyond the emotions sure to flow, he wants to see his fourth-ranked Blue Devils maintain the momentum they have built with only one loss since mid-January. That includes a romp against the rival Tar Heels, who will be eager to prove they're better than what they showed in last month's 20-point loss on their homecourt.

"I feel like in the last couple of weeks -- not that we were immature - the maturity of our team has gone up a lot," Krzyzewski said, adding: "We just seem to have made a jump, and hopefully this game will help us make another jump."

Duke (26-4, 16-3) has already wrapped up the program's first outright Atlantic Coast Conference regular-season championship since 2006, which will send the Blue Devils to New York with the No. 1 seed for next week's men's ACC Tournament. But since last June when Krzyzewski announced his 42nd season in Durham would be his last, there's been the push to send the winningest coach in college basketball history out with a storybook title run in the NCAA Tournament.


"It's unbelievable: he's 75, he's yelling, screaming, smacking the floor," freshman Trevor Keels said. "It's just you see somebody doing all that, it's crazy.

That makes the latest renewal of the fierce rivalry as much about the long-term picture for the league's lone AP Top 25 team, led by talented freshmen Paolo Banchero and A.J. Griffin.

The Blue Devils' four losses have come by a combined nine points, the last being 69-68 at home to Virginia on a last-second 3-pointer. They've won seven straight since, while Krzyzewski spotted some particular growth during a practice before the Feb. 23 win against the Cavaliers in the rematch.

The moment came when he watching how the team was operating defensively, which he noted to associate head coaches Chris Carrawell and Jon Scheyer - Krzyzewski's designated successor for next season.