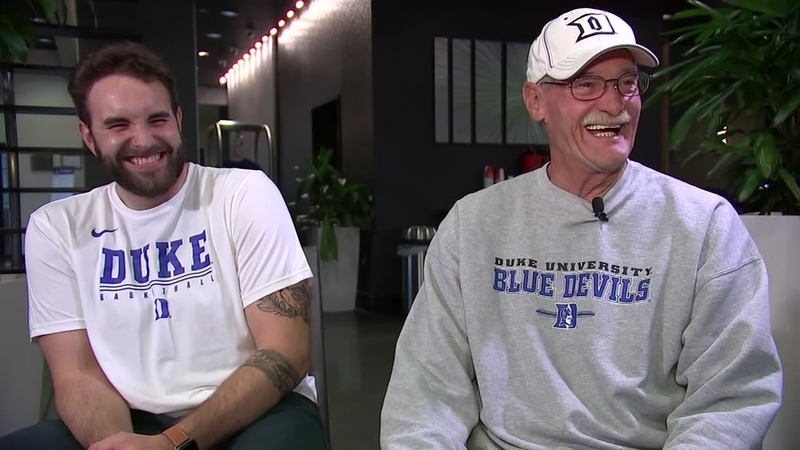 CHARLOTTE, N.C. (WTVD) -- Grant Ghiringhelli grew up a Duke fan thanks to his grandfather, Ken Rogers, who he calls his best friend. The two call each other during every game but Thursday night, they didn't have to because they were sitting next to each other watching the madness first hand.

"That was so awesome. You see them. They're big, they're fast, but until you actually listen and watch them," Rogers said, "TV doesn't do them justice."

"Especially seeing Zion (Williamson), it's a true treat because he's not going to be here next year," Ghiringhelli said. "Getting to say I saw Zion at the ACC Tournament when he was in college is unbelievable."

Williamson wasn't the only treat Ghiringhelli and his grandpa got Thursday night.

"The guy that does the halftime show or what not kind of makes eye contact with me from a couple rows down and he goes 'is that a leg?'" Ghiringhelli said. "He kind of mouthed it to me and I said, yeah, it's a leg. It's my grandpa's leg."

"It was already off," Rogers said. "He just took the leg off and walked ... but after about the 18th minute, I was saying, God I hope he gets back soon. All the people around me, Syracuse fans, North Carolina fans ... 'is he coming back with your leg?'"

Rogers lost his leg about a year ago because of complications from diabetes. Now, he has a prosthetic leg with a big Duke logo on it. That's the same leg Grant used to hype up the crowd and win a $50 gift card to Bojangles.

"I basically said this is his first Duke game ever, he's sitting in the stands," Ghiringhelli said. "This is what commitment looks like and just pulled it back and people went nuts, which was awesome."

"When he showed the symbol and he turned around and he pointed up to me, the section I was in just erupted," Rogers said. "Everybody was laughing and screaming. It was joyous, that's what you do. You get up, you say what the heck is going to bother me? This is not a problem, it's all in your mind."

Rogers said he still plays golf four days a week. He said he even gets more strokes in golf than he did before.