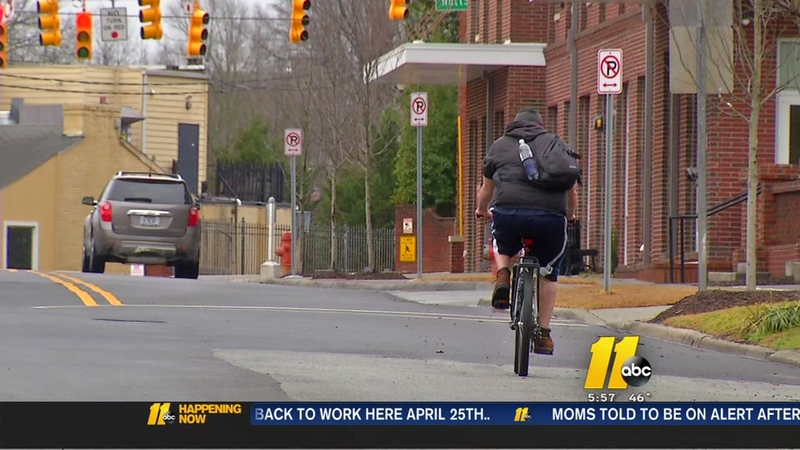 Durham Bicycle Boulevards wants to divert cut-through traffic off of neighborhood streets to make way for cyclists, creating a main thoroughfare for bike riders to use instead of major streets.

RELATED: Cyclists in hospital after being hit by car in Angier

"The first thing everybody thinks is like 'oh my God, they're going to shut down the street to cars' and that's exactly not what it is," said Durham Bicycle Boulevards director Aaron Lubeck.

Lubeck said this sort of traffic diversion is achieved through the use of bike-permeable barriers that interrupt the flow of vehicle traffic on a cut-through street every four to eight blocks.

The barriers would be wide enough to allow a cyclist to pass and ride through the length of the street, but not wide enough for a car to pass. Lubeck said this would then centralize bicycle traffic on this street and off of parallel main streets, and divert traffic on to those main streets instead.

Lubeck said the move would help to protects cyclists who aren't comfortable traversing those main streets.

"My motivation is very personal," Lubeck said. "My son turns 10 next month and I'm not going to put him on a busy street, but I'll put them on streets like Watts Street all day, and so it's not that difficult to build a network that works for all ages and abilities and that's what we aim to do."

He said Watts Street is a great example of such a residential street and hopes the City of Durham will implement a model bicycle boulevard there, diverting vehicle traffic on this street to Duke and Gregson streets which run parallel.

"Watts has sort of been adopted by the community as a bike boulevard even though most people don't know that name," Lubeck said. "If you're here at rush-hour, you'll see more bikes on the street than cars."

Several neighbors who live near Watts Street said they agree with Lubeck.

"I think it's a fantastic idea actually because there are so many bikers here and there's no real road for them to get to the downtown area," Durham resident Kim Winton said.

"I think that will have the added benefit of slowing traffic down on Watts Street, so I see it as a win-win situation," Carol Anderson said.

Downtown Durham Tech CEO and Windsor Circle co-founder Matt Williamson agrees and said the plan would help the growth of his workforce.

"We've got 75 or 80 employees; we're all generally of a set of people who love being outdoors, and being physical, and that kind of thing," Williamson said. "And so having an active bicycle boulevard network would make it very attractive for the particular demographic of people that we're hiring because they would be able to safely get in and out and to work on their bicycles."

The City of Durham is updating its bicycle and pedestrian plan this year. The redesign process is scheduled to start in March.

Check out the Durham's current bicycle and pedestrian plans here.

The city has received the plans put forth by Durham Bicycle Boulevards and will consider how they might be incorporated into their redesign, according to transportation planner Bryan Poole.

The redesign process is expected to take several months, as the city will asks for public input in a series of meetings to come. The process could stretch into 2017. The pedestrian portion of the plan was updated in 2011 but the entire plan has not been updated since 2006.