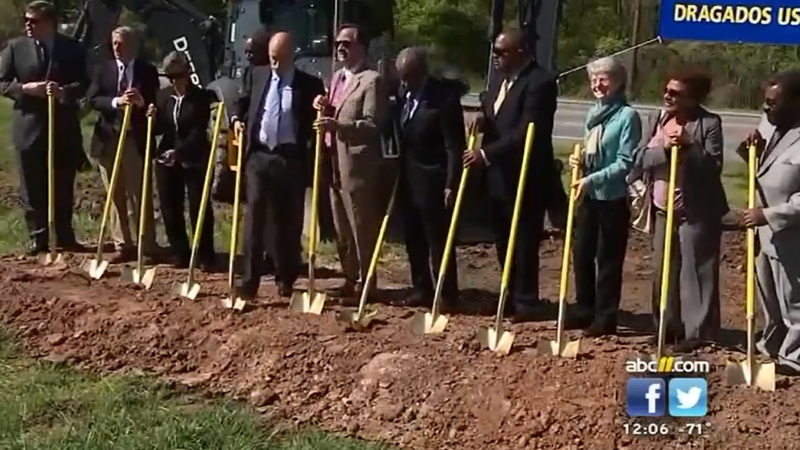 DURHAM (WTVD) -- More than 55 years after the idea was first proposed, work on the East End Connector linking U.S. Highway 70 to Highway 147 in Durham is beginning.

North Carolina Department of Transportation officials were joined by City of Durham and Durham County leaders for a groundbreaking Wednesday.

"This will be a route especially for the persons in northern Durham, that want to get to the Raleigh Durham airport, that even want to get into downtown Durham without necessarily having to go the routes that they take now," said Durham Mayor Bill Bell.

First introduced back in 1959, the $142 million, 3.9-mile project will mean a direct connection between the Durham Freeway to U.S. 70 just north of the N.C. 98 intersection - creating a link between I-85 and I-40, the Triangle Expressway, and U.S. 1 in southern Wake County.

Click here for a map from the NCDOT (.pdf)

While the project displaced more than a dozen residents living in the path of the road, and even more businesses, Mayor Bell said the project was a long time coming and they did the best they could in the circumstances.

Bell said there will likely be an economic benefit too.

"Hopefully companies that now might want to relocate in the northern part of the county will no longer have an issue of being able to get down into Durham and to the airport as they do now," he explained.

While some might question bringing even more traffic on to Hwy 147 - which often sees long traffic delays during rush-hour times - the DOT says the project will ease congestion on the Durham Freeway through downtown Durham and will also help divert traffic off local roads such as U.S. 15/501, which it says is often used as a connection between I-85 and I-40, as well as Roxboro, Mangum, Gregson, and Duke streets.

The Connector is expected to be open in 2019.