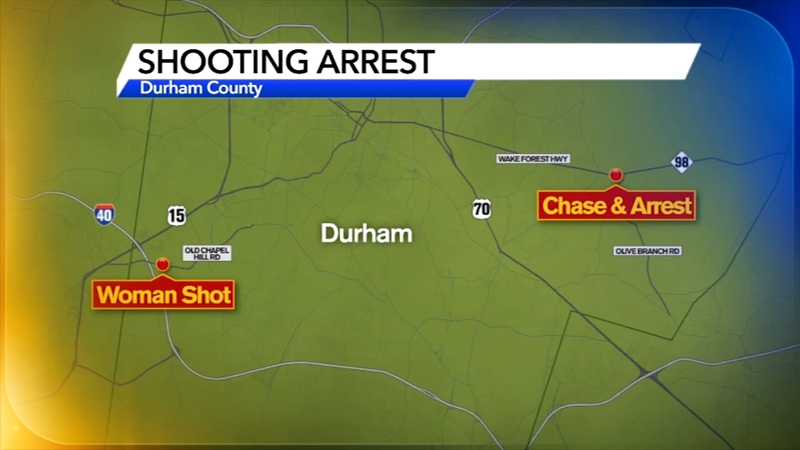 DURHAM, N.C. (WTVD) -- Durham Police have arrested a man in connection with the shooting of a woman early Monday morning.

Police officers responded about 7:45 a.m. to the 5100 block of Old Chapel Hill Road and found a woman suffering from a gunshot wound.

She was taken to a hospital with what appeared to be serious but non-life-threatening injuries.

Police determined the shooting was not random and identified Dijon Preston McGirt, 32, of Durham, as the suspect.

Officers found McGirt inside his vehicle at South Woodcrest Street and Holloway Street and attempted a traffic stop, but McGirt refused to stop and led police on a short car chase.

McGirt crashed into another car at Wake Forest Highway and Olive Branch Road and tried to flee on foot, but officers took him into custody.

The person in the car that McGirt crashed into was taken to a hospital with what police said were minor injuries.

McGirt was charged with shooting into a occupied dwelling, breaking and entering with intent to terrorize, assault with a deadly weapon with the intent to kill inflicting serious injuries, felony fleeing to elude arrest, reckless driving and resist delay and obstruct.

He is being held at the Durham County Jail with no bond.