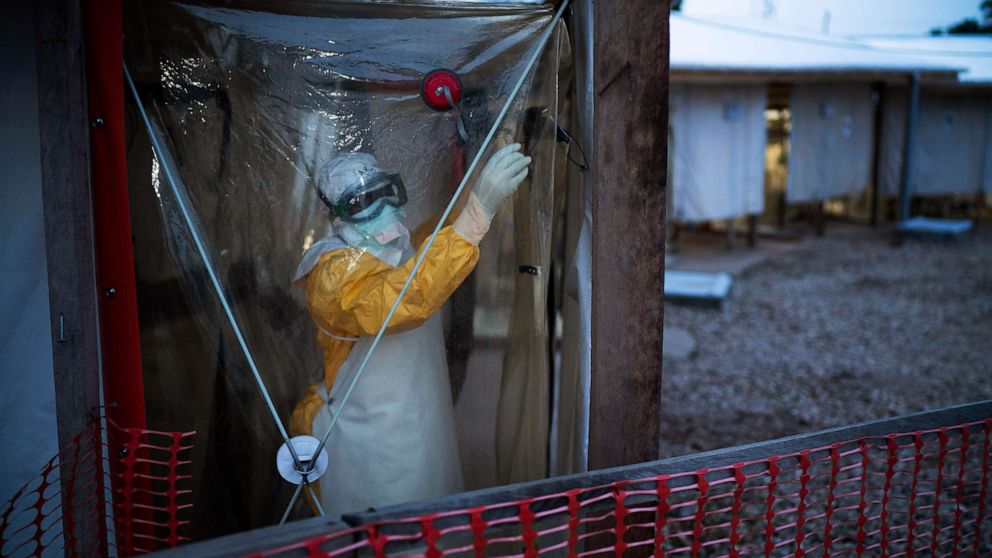 LONDON -- The yearlong Ebola outbreak in the eastern Democratic Republic of the Congo has spread to a third province, health officials said.

Two new patients, a 24-year-old woman and her 7-month-old child, tested positive for the virus in the Mwenga area of South Kivu province on Thursday night. They fell ill after returning from a visit to Beni in North Kivu province, the epicenter of the current outbreak. The mother has since died, and her child is receiving treatment, according to a statement released Friday from Dr. Jean-Jacques Muyembe, director general of the Democratic Republic of the Congo's National Institute for Biomedical Research and head of the country's Ebola response team.

Officials have identified dozens of people who may have been infected by coming in contact with the woman and her child. They will receive the experimental vaccine that has been used to inoculate some 200,000 people in the outbreak zone, according to Muyembe.

A third Ebola case was confirmed in the same area of South Kivu on Saturday, according to the latest data from the Congolese health ministry and the World Health Organization, the global health arm of the United Nations which last month declared the current outbreak an international emergency.

Since Aug. 1, 2018, a total of 2,877 people have reported symptoms of hemorrhagic fever in the Democratic Republic of the Congo's eastern provinces of North Kivu, Ituri and now South Kivu, according to the latest data. Among those cases, some 2,783 have tested positive for Ebola virus disease, which causes an often-fatal type of hemorrhagic fever and is transmitted through contact with blood or secretions from an infected person. An average of 81 new Ebola cases are confirmed each week.

The ongoing outbreak has a case fatality rate of about 67%. There have been 1,934 deaths so far, most from confirmed cases of Ebola, according to the latest data.

The vast majority of cases have been concentrated in North Kivu, specifically around the northeastern areas of Beni, Butembo, Katwa, and Mabalako. There are currently no confirmed cases of Ebola outside the Democratic Republic of the Congo.

This is the 10th outbreak of the disease in the Democratic Republic of the Congo and the most severe there since 1976, when scientists identified the deadly virus near the Ebola River. It's also the second-largest, second-deadliest outbreak in the world.

The WHO's director-general has described the current outbreak as more complex than the deadlier 2014-2016 outbreak in multiple West African countries due to the region's political instability, attacks on health workers, a highly mobile population and community mistrust and misinformation. It's also the first Ebola outbreak in an active war zone.

However, two of four experimental treatments being tested in the current outbreak now will be offered to all patients after showing promise in saving lives. Preliminary findings from a randomized controlled trial that began last November in four Ebola treatment centers in North Kivu indicated that patients receiving either of two antibody-based therapies, known as REGN-EB3 and mAb114, had a greater chance of survival compared to those receiving two other experiential drugs, known as ZMapp and remdesivir

After a meeting to review the initial results, an independent monitoring board recommended all future patients be offered either REGN-EB3 or mAb114, while the other two treatments be stopped.