Cumberland County, other school districts to close May 16 for teacher's rally 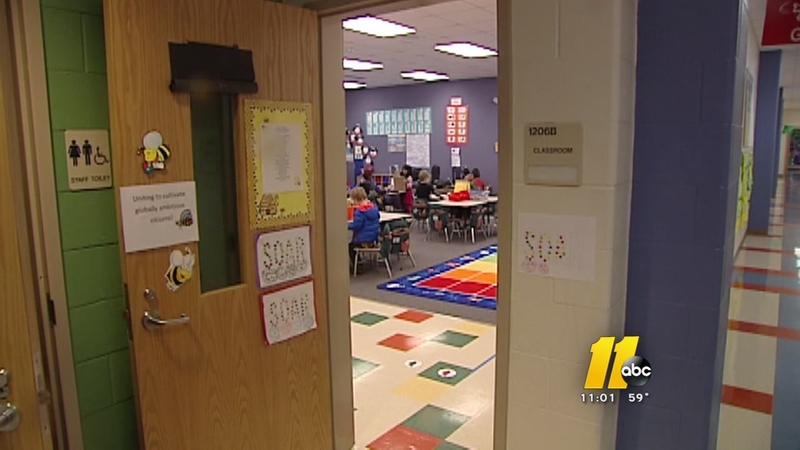 Wake, other school districts will close May 16

RALEIGH, NC (WTVD) -- Cumberland County Schools announced Thursday afternoon that it will be closed on May 16 because of a planned teacher's rally.

Earlier this week, Wake County Schools announced that it would also be closed on May 16 because of the rally.

Officials say the closing will not affect finals and there will be no makeup day. AP exams will take place as scheduled.

"Folks are tired of being mistreated by the General Assembly. They're tired of their professionalism being diminished," said Wake County NCAE President-Elect Kristen Beller. "Our health care premiums have gone up. We lost our Masters pay. We lost our career status, which gives you due-process in termination."

[ALERT] All schools will be closed on Wednesday, May 16, due to a teacher’s rally in Raleigh scheduled for the same day. https://t.co/dsUIaSzwBh

Wake County School Board Chairwoman Monika Johnson-Hostler says there is still opportunity for children to learn during the rally May 16.

She said, "I'm hoping as a parent, many people will use this as a lesson for our students regardless of what people think about what we're doing, it's important to show our students as adults some of our job civically is to vote but also to have our voices heard."

One Wake Schools employee said parents should support teachers in their lobbying efforts.

"Education is the foundation of our state. If our children don't get educated, how are we going to put them in these jobs you keep talking about coming to North Carolina if they don't get their education?" said Pamela McDougal, a Wake County Schools employee. "They need that foundation and good teachers and Wake County is not doing the job they need to do.

It's helping your child get a better education if you look at the round picture and they should be supportive of the teachers and it would be good if the parents come out and support the teachers in their fight," McDougal added.

Sonike Turner, the parent of a 13-year-old, voiced her approval for what the teachers are advocating - and cited ample notice as a key factor.

"I'm all in for teachers getting opportunities and fighting for what they need as far as equal pay or whatever the case might be. They gotta do what they gotta do," she said. "The good thing is that they did have given us ample time to be able to find child care or whatever the case may be, so had it been a late notice, it may have been an issue."

Wake County Schools to close for Day of Advocacy

Durham and Chapel Hill-Carrboro City Schools have also announced they will be closed on the day.

Thousands of teachers are expected to protest at the General Assembly in Raleigh on the 16th when lawmakers reconvene for the legislative short session.

Nearly 800 Durham teachers have pledged not to come to work May 16 and instead travel to the Raleigh to lobby the legislature for what they say are desperately needed new state dollars for underfunded school systems.

Nearly 800 Durham teachers have pledged not to go to work May 16.

Education leaders say although North Carolina teaching salaries have gone up slightly year-to-year, the state still ranks among the lowest nationwide in overall teacher pay with the total average salary just under $50,000 per year.

They hope a mass walkout will lead to changes in classroom conditions and education.

Orange County Schools said Monday evening that it will join other Triangle school districts and be closed on May 16 because of a planned teacher's rally in Raleigh.

The day will be an optional teacher workday. Read more here.

Also on Monday, the Nash-Rocky Mount Board of Education voted unanimously to adjust the school calendar closing for students and making May 16 an optional teacher workday.

The district said it anticipates mass teacher absences on that day.

The central office will operate on a regular schedule.