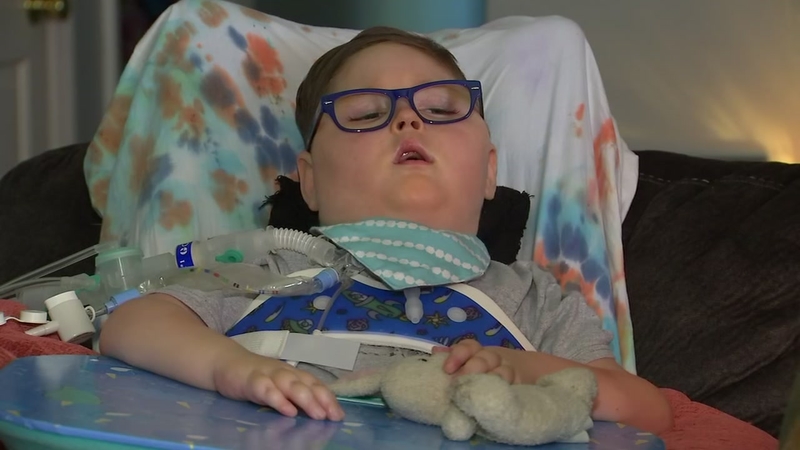 RAEFORD, N.C. (WTVD) -- A local mom is fighting for an accessible and inclusive education for her five-year-old son with a disability.

Thomas "Bubby" Mosher starts kindergarten in Hoke County next year but his family is already getting a lesson in red tape. Bubby's mom said the school he's assigned to isn't accessible enough for his needs. She asked for her son to be reassigned but she was denied.

Doctors weren't expecting Thomas Mosher Jr. to live past age two, but just like his military father, he's a fighter.

"A tough one," his mom, Brittany Mosher said. "His diagnosis is spinal muscular atrophy type one. He was diagnosed at four months old and we weren't given a lot of hope, so they said it would be a miracle if he made it to a year."

Now, Bubby, as his family calls him, is five years old, thanks to a special drug that helped prolong his life.

"It's like a new light of hope where we didn't know that school was a possibility before," said Brittany.

Bubby is in Pre-K. His teachers and nurses come to him. But this fall, his mom wants him to go to kindergarten with kids his own age. She worries that the school he's assigned to, Upchurch Elementary, isn't accessible enough for his special needs. When she asked Hoke County Schools for a reassignment, she got a letter that said she was denied.

"I don't feel like our request was even read, much less considered, " she said.

Upchurch Elementary was built decades ago. Brittany said like many older schools, doorways are narrow, hallways are tight, classrooms are small, and the school itself was built on a hill. She said none of that will work with Bubby's power-wheelchair.

"So if there's a pathway that's uneven, if he hits a bump wrong I don't know what could really happen. You know, like he could hit a bump and his chair could tip and I'm not really sure and I don't want to take that risk," she said.

But Brittany said that it's not just about accessibility, but inclusivity.

"When we did the shadowing for the half-day we went up to the playground and of course he started crying because he sees all the kids doing things and he can't do anything because there's nothing for him to do. He can't even get up onto the playground where it's at," she said.

Hoke County Schools told ABC11 that all of their schools are ADA compliant but the first step, in this case, would be a kindergarten transition meeting with nurses, advocates and parents. From there, the IEP team will determine whether a re-assignment is necessary.

Brittany wishes there had been a discussion. The letter she received, gave no explanation.

"While all of our schools are ADA compliant, there are sometimes special circumstances for which the IEP Team will consider whether the assigned school building and campus best meet the needs of the student. If it is determined that the student would benefit from being reassigned to a different school, that recommendation is made to the Superintendent by the IEP Team, which includes the parents. It is the goal of Hoke County Schools to assist parents in this process of developing a plan to not only meet the needs of students but to help them excel in the classroom and beyond."