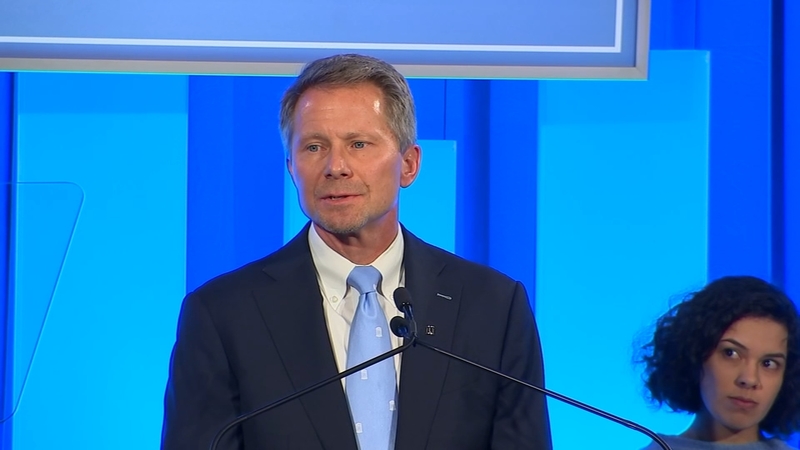 Guskiewicz was selected by UNC System Interim President Bill Roper and approved by the UNC Board of Governors from among two final candidates for the position.

Guskiewicz replaced Carol Folt in February after she announced her resignation and was then forced out early.

"Kevin Guskiewicz possesses the leadership qualities needed to take Carolina forward: strength, poise, humility, vision, the strong proficiency to listen, and the ability to bring people together," said Dr. Roper. "Throughout his distinguished career in higher education, Kevin has demonstrated a sustained track record of success. I have the utmost confidence that UNC-Chapel Hill will continue to flourish and prosper under his continued leadership."

At an introductory news conference, Guskiewicz said he was humbled and honored.

"I have many people to thank for this opportunity," Guskiewicz said. "This includes my family, UNC Interim President Bill Roper and the UNC Board of Governors, Search Committee Chair Richard Stevens and the committee members, and the Board of Trustees. Thank you also to my team at the Gfeller Center and the Center for the Study of Retired Athletes. I also extend my gratitude to my colleagues in Exercise and Sport Science, where I began as a junior faculty member, and to the outstanding team in the College of Arts & Sciences, where I served as dean.

"I especially want to thank my dedicated leadership team and the entire Carolina Community-our students, faculty and staff -- who have supported me as interim chancellor during these past 10months," he added.

The Board of Governors voted on Guskiewicz over the phone, as their December committee meeting was held via conference call.

Protesters were at the meetings because of a recently announced settlement approved by the Board of Governors that puts $2.5 million in a trust to be managed by the Sons of Confederate Veterans, who were also given ownership of the Confederate monument Silent Sam.

Guskiewicz expressed his reservations about that settlement in a letter sent Wednesday to Roper and the Board of Governors Chair.

Before taking this leadership role at UNC, Guskiewicz gained fame as a neuroscientist and nationally recognized expert on sport-related concussions. He maintains an active research portfolio and is principal investigator or co-investigator on three active research grants, totaling more than $16 million.

"I am humbled and honored to be named the 12th chancellor at the University of North Carolina at Chapel Hill," Guskiewicz said. "Carolina has been my home for almost 25 years, and I am grateful for this opportunity to serve every member of our community. My vision for Carolina is that we will move forward into the future with boldness and confidence because our work is vital for the people of our state, the nation and the world. There is no institution in the world that is more capable of changing the future than our nation's first public university. I am committed to championing our community, fighting for our values and demonstrating that we make a difference in the lives of all North Carolinians."
Report a correction or typo
Related topics:
educationncchapel hillorange countyeducationuncsilent sam
Copyright © 2021 WTVD-TV. All Rights Reserved.
TOP STORIES
NC plantation cancels event depicting slave owners as fugitives
Soccer player collapses, given chest compressions during Euro 2020 match
Advocates seek justice in the police killing of Andrew Brown Jr.
Diver describes near-death experience inside whale's mouth
Knightdale police looking to ID greenway trail assault suspect
Alton Sterling's kids accept $4.5M settlement after fatal police shooting
Prosecutors call for innocent man's release from prison, but existing law prevents it
Show More
Mass shooting on Austin's 6th Street: 14 hurt, suspects at large
NC eyes door-to-door approach to get low-income residents vaccinated
CDC to discuss reports of heart inflammation in young people after vaccine
Florida bans 'critical race theory' from its classrooms
FL supermarket shooter posted to Facebook about killing people: Sheriff
More TOP STORIES News