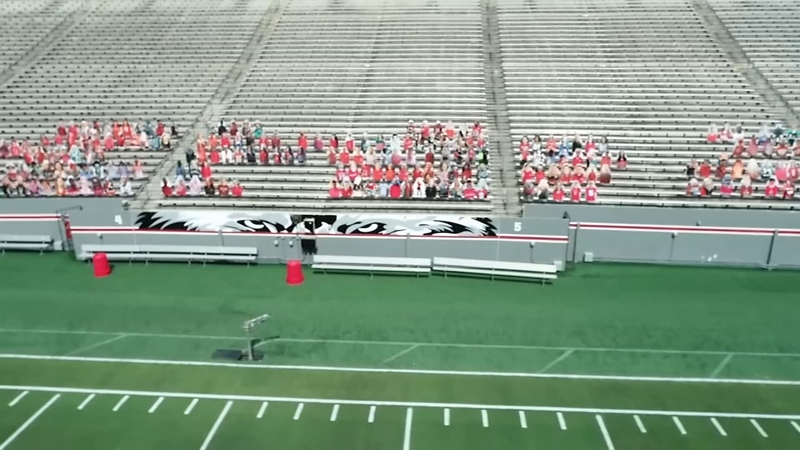 RALEIGH, N.C. (WTVD) -- Joe DiPietro is the co-founder of a tech company called Perk Social, which is a fan loyalty program. When COVID-19 hit, he and his partner, Taylor Gaussoin, shifted to a new fan engagement program called Fancutouts.

"It's the best thing ever," he said. It's been a tough year for everybody."

"Each team gets a unique link," DiPietro said. "You can take a photo or you can pick a photo around to try to make it fit because all of the cutouts are the same size. Then we have a full approval process Every team has their own rules on what is allowed and what isn't allowed. My team looks manually at each image and either approves or disapproves based off of the rules. From there it goes to print."

Each team has certain guidelines for the pictures which DiPietro and his team approve.

DiPietro and his company team with printers across the country including Gauley at Telepathic Graphics in Raleigh.

"I think it will give them a little bit of an inspiration that people do care," said Gauley. "I feel bad that their parents can't come to the game. I feel bad that nobody can go but I understand why. At least they know that these folks are out there trying, caring and they believe in them."

The cutouts are all the same shape and size at each stadium; they range by stadium between 17-18 inches wide and 30-33 inches tall and are printed onto a durable material called Coroplast.

"It's also cool to know you're bringing joy to people who get to feel like they are a part of something again because everybody is just desperate to be part of something; we are too," DiPietro said. "Much of the proceeds are going to good causes too, it's a win-win for everybody."

Gauley, too, is glad to be able to help during these tough times.

"You're helping the university make a little bit of money and the kids that are playing," Gauley said. "Their moms and dads can't even go watch them play. I wish they had a few people but I'm hoping the cutouts give them a little bit of inspiration that hey, there's some people out there that really care about you guys and hope you do a really good job."

Gauley and his team have printed more than 2,500 fan cutouts for Appalachian State, Duke and NC State. He said each picture tells a story -- but there's one that sticks out to him most.

"It was Labor Day," Gauley said. "I was sitting at the lake and I saw one of a good friend. Chris Combs, that came across that someone had put up there. It just made me stop think and reflect. He passed away a few weeks ago. To sit there and say, you know, he's not here anymore but he's going to be there at the games which is cool. I think that's a really important part of it.

"You see them with Jimmy V, with Kay Yow; you've seen a lot of different ones that have come through," he added. "That part's been good, but it will tug on your heart just a little bit real quickly."