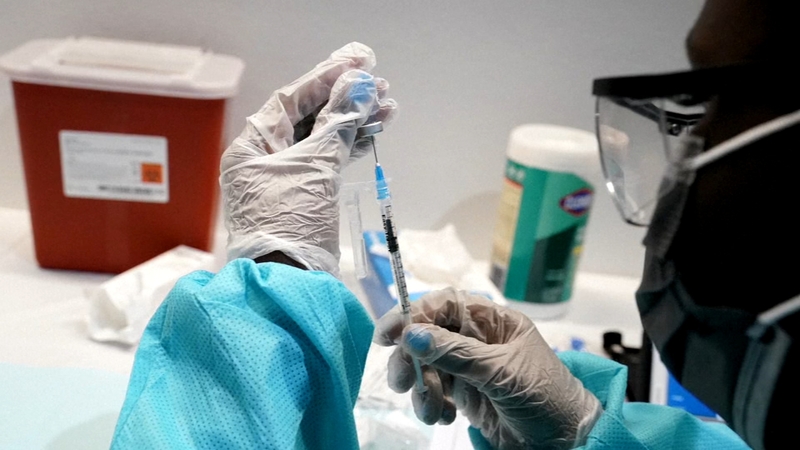 The US Food and Drug Administration insists it is working as quickly as possible to review applications for full approval of the COVID-19 vaccines as the number of cases continues to rise and vaccination rates decline across the country.

Though the FDA has yet to disclose a time line for when its work will be done, medical experts and sources familiar with the process tell CNN that full approval could come within the next couple of months. While that would amount to a record fast pace, the urgency is rising for a fully approved vaccine given the troubling surge in COVID cases sweeping the country.

An FDA official told CNN on Wednesday that the agency continues to work as fast as possible to review the applications. The official noted that as part of the emergency use authorization granted last year, the vaccines have already undergone a "thorough scientific evaluation" in order to "meet FDA's rigorous standards for safety, effectiveness, and manufacturing quality."

Still, federal medical officials and business leaders agree that full FDA approval would be helpful in the fight against vaccine hesitancy and would support companies eager to issue vaccine mandates to employees returning to the office. But the Biden administration has remained cautious on the issue and does not want the massive step of full approval to carry a political taint. A federal official told CNN this week that the White House is not pressuring the FDA to speed full approval of coronavirus vaccines.

ABC chief medical correspondent Dr. Jen Ashton explains what we know and don't know about the threat posed by the Delta variant of COVID-19.

That doesn't mean Biden officials aren't interested. The White House has kept a keen eye on the FDA's approval process -- "obsessively so," in the words of a senior Biden adviser -- but has intentionally steered clear of any appearances of trying to tip the scale or accelerate the outcome, administration officials say.

Inside the West Wing, and across the scientific community, there is a high degree of confidence the FDA will fully approve the Pfizer and Moderna COVID-19 vaccines, even though the precise timing is far from certain. Johnson & Johnson has not yet filed for full FDA approval of its coronavirus vaccine.

There is not a sense inside the White House that the FDA is dragging its feet, officials said, particularly compared to the years-long process that approval of a major vaccine normally takes.

"The FDA is the gold standard for vaccine review and approval," Jeff Zients, senior White House coronavirus adviser, said at a briefing last week. "They'll run an independent and rigorous scientific process and when that process is complete, the American people can rest assured that the FDA maintained those world-class standards throughout this period."

The CDC issued a new report with the troubling finding behind its new mask guidance as state officials grapple with their own mandates.

The bigger question is whether such approval would actually ease vaccine hesitancy across the country, officials say.

"Yes, it will be another tool in the toolkit. We aren't naive to think it will suddenly change all minds," a senior Biden adviser tells CNN, speaking on condition of anonymity to talk freely about internal deliberations.

One of the top medical officials in the federal government says full approval also could lead to employers getting additional legal cover to mandate that their employees get vaccinated.

"If it was approved with the full approval from FDA -- which we all anticipate may be coming pretty soon ... maybe in the next couple of months -- then the legal ability to mandate becomes a lot stronger," Dr. Francis Collins, director of the National Institutes of Health, said last week.

The White House has increased its outreach to business and civic leaders, some of whom have told administration officials that they will have more leverage to require vaccinations for employees after the FDA grants full approval.

Ken Langone, a co-founder of Home Depot who also serves as chairman of the board of trustees at NYU Langone Medical Center, believes there will be far less litigation if the vaccines are fully approved.

"You get the FDA to say, 'It's final, it's approved,' and I can guarantee you all the places I'm involved in, if you don't get vaccinated you will get fired," Langone told CNBC on Wednesday. "You have an obligation to your fellow man to protect him as well as yourself."

A senior administration official said the sentiment expressed by Langone was one that other business executives have also expressed to the White House. But it's far from certain how widespread the view is or whether any type of broad movement could be sparked by a green light from the FDA.

A Kaiser Family Foundation survey of US adults released this month found that among the one-third of adults surveyed who are not yet vaccinated, 16% said the vaccine was too new, too unknown or not tested enough. Some said in this poll that they wouldn't get a vaccine until it is required. While companies are allowed to require the vaccine, experts believe more will make it a requirement if -- and when -- it gets full approval.

Dr. William Schaffner, a professor in the Division of Infectious Diseases at Vanderbilt University Medical Center, said "a lot" would change once the vaccine is fully licensed for use, stressing that full authorization was critical to increasing vaccination rates.

"We need full licensure to reach more unvaccinated people," Schaffner said. "And obviously getting more people vaccinated as quickly as possible is critical to our trying to control this ongoing pandemic, which now is surging yet again in the United States."

"Under emergency use authorization states are limited as to what they can mandate," Cuomo said while addressing The Association for a Better New York at a virtual meeting. "Once the vaccine is finally approved, then the state has more legal authority to mandate the vaccine."

Map not displaying correctly? Click here to open in a new window.

Inside the approval process

The FDA should have all the paperwork and data from the vaccine trials from Pfizer and be in the reviewing process, medical experts said.

In July, Pfizer announced that the FDA had granted its vaccine a priority review, accelerating the process from 10 months to six, meaning that technically approval should be granted by January.

But the acting commissioner of the FDA, Dr. Janet Woodcock, has said the FDA intends to complete the review far in advance of its January deadline. Multiple officials told CNN the FDA is working nonstop to get through the review process and grant approval.

Former FDA Commissioner Dr. Scott Gottlieb said on Wednesday that he believed the approval could come as early as next month.

"I long felt that the FDA would approve the vaccine probably within a three- to four-month time frame from when the application was submitted. Those applications were submitted about two and a half, three months ago. ... So I think that puts you on (an) end of August, September time frame in terms of when these are going to be approved."

Medical experts stressed that the vaccination approval process takes time, even for something as vital as COVID-19 vaccines.

"People are saying, 'Why is it taking so long?' Well, the FDA wants to make sure that it has a protective duration, long-term effect," said Melissa Tice, program director of regulatory affairs and assistant professor of clinical research and leadership at George Washington University School of Medicine & Health Sciences. "It's not that the agency, I think, has any concerns about the vaccine per se, they just, per licensure requirements, you have to have this additional data."

The COVID-19 vaccines received emergency use authorization based on interim data that showed they were safe and effective for only about three months. For full approval, the FDA has at least six months of efficacy data to review -- and that means combing through and analyzing an enormous amount of information.

"When we were reviewing applications back when they were on paper, there was so much it would not fit on the freight elevator. That's how big the application is. You have lots of data to review," said Norman Baylor, who used to run the FDA's Office of Vaccines Research and Review and been through this process several times. He's the current CEO of Biologics Consulting.

An interdisciplinary team of FDA experts is poring through millions of these documents, running their own analysis, getting any clarification that it needs from the vaccine companies and giving the manufacturing process a thorough inspection.

And it's not just one FDA person who does the review, Baylor said. There's a secondary and tertiary review. So a clinician would review the material and then a supervisor would need to review it and then it goes up to the division director.

Because the FDA has already reviewed the manufacturing materials and has been reviewing clinical data all along, Tice said, "We don't expect it to go the full six-month priority review clock."

Tice says she thinks full approval for Pfizer's vaccine could come in September.