Report: Ferris wheel that dropped girls had worn out rivets NASHVILLE, Tenn. -- Worn out rivet fasteners on a Ferris wheel are being blamed for an overturned gondola at an eastern Tennessee fair that earlier this week sent three girls plummeting more than 30 feet to the ground.

The Tennessee Department of Labor and Workforce Development announced late Friday that it has renewed permits for the ride's owner, Family Attractions Amusement, to resume operations at other fairs around the state. But the Ferris wheel is excluded from the permit.

Inspectors hired by the company and the Greene County Fair found that rivets had worn out on the bottom of the tub carrying the girls, allowing a trim piece to come loose and get lodged in the frame of the wheel and tipping the gondola over.

"Ride NOT safe to operate at time of inspection," Frank Guenthner, an inspector hired by ride owner Family Attractions Amusement, wrote in his report.

The Ferris wheel, which inspectors say was correctly assembled at the site, is being sent back to the manufacturer for repair.

Tennessee does not conduct its own inspections of fair or amusement park rides, instead relying on third-party inspectors. The company was allowed to operate in the state based on an inspection made in Indiana in June.

Six-year-old Briley Rae Reynolds suffered a traumatic brain injury in the fall on Monday and her 10-year-old sister, Kayla, broke her arm. Kayla and an unidentified 16-year old have been released from the hospital, but Briley Rae remained in critical condition.

Republican Gov. Bill Haslam told reporters earlier Friday that it was too soon to say what Tennessee might do to avoid future injuries on rides

"I don't know that right now I have a policy shift of what should happen differently," he said.

It's not the first time Family Attractions Amusement rides have hurt riders.

At the 2013 North Carolina State Fair, five people were injured when an Italian-made ride called the Vortex unexpectedly restarted as they were trying to get off the ride, flinging them through the air and down to the steel deck below. Investigators determined that a safety mechanism had been disabled by ride operators including the son of company owners Dominic and Ruby Macaroni. 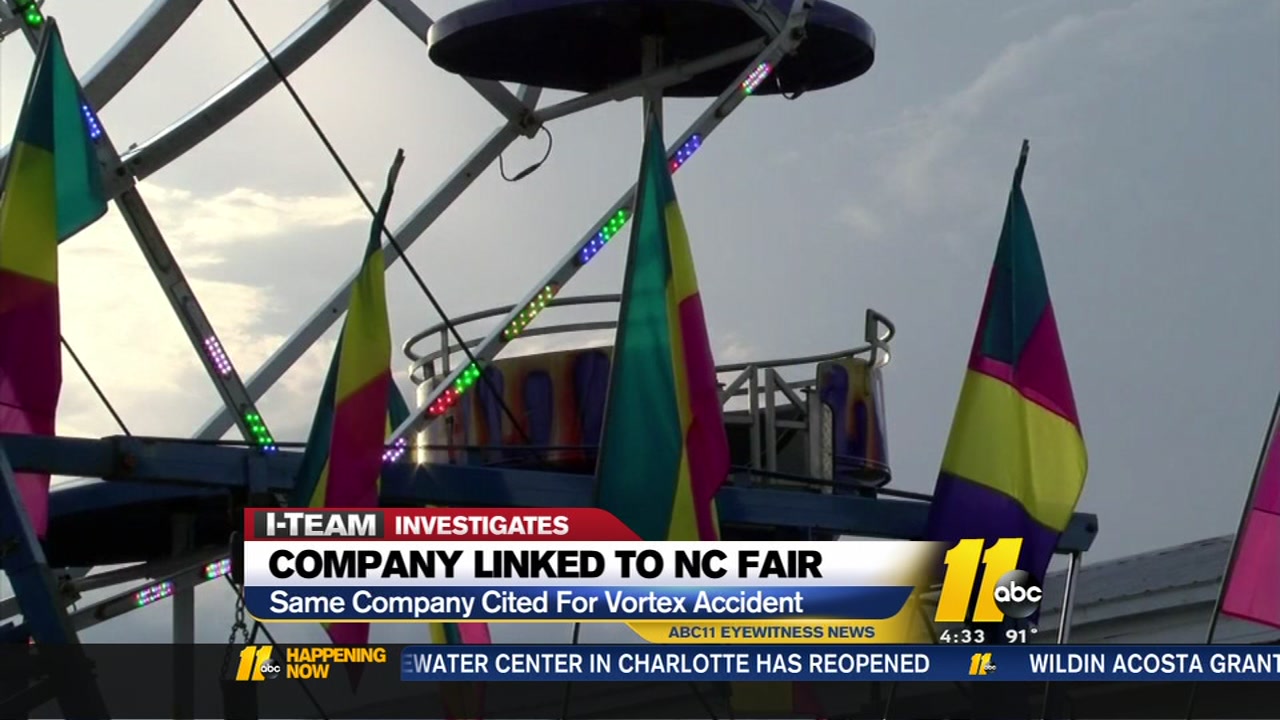 Company linked to NC Fair
The Macaroni family owns Family Attractions Amusement in Georgia, which owns the Ferris wheel that malfunctioned in Tennessee on Aug. 8. The company also owned the ride that went out of control at the North Carolina State Fair in 2013 after the operator, Tim Tutterow, tampered with safety equipment on the Vortex.

Joshua Macaroni earlier this year entered an Alford plea - a concession that there is sufficient evidence for a conviction without admitting guilt - on a felony charge of obstruction of justice. He was sentenced in February to five to 15 months in prison, though the judge suspended that to a month in jail. He was also ordered pay a $22,500 fine.

The Greeneville Sun has reported that Greene County Fair Board officials decided to go through with a five-year contract with a Family Attractions despite the North Carolina incident, citing the company's previous safety record in Tennessee and the owners' claims that they were not involved with the Vortex ride.

Their rides were not inspected when they were assembled in Tennessee.

Family Attractions Amusement had already taken down its rides in Greeneville the day before the state decision to allow most of the rides to resume.