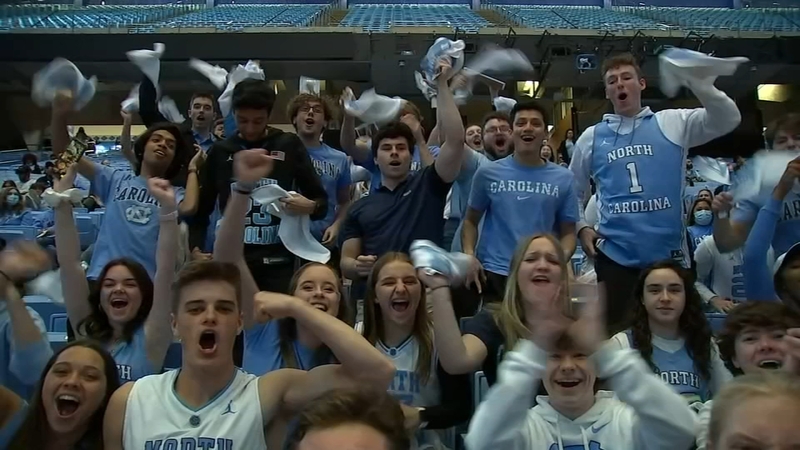 The students and fans are watching a game that has never happened before. Carolina vs Duke but in the NCAA tournament, and in this case, with a birth in the championship game on the line.

UNC and Duke fans are on edge! pic.twitter.com/25KPSSNzfw

Lines continued to stretch far outside the Dean E. Smith Center before the game started with some fans arriving early to grab a seat.

"It's going to be awesome to see them win, to be right in the middle of everything," said one fan.

"This is a moment right here. This is the championship, and it's not even championship. This is Duke vs UNC. You have to be here and if you're not here what are you doing," a UNC student said.

Duke students were also filling inside Cameron Indoor Stadium to watch the game in a way that only the Cameron Crazies can. Crowd numbers were at capacity with 6,241 fans. An estimated 2,013 of those fans were on the floor and 4,028 in the stands at the stadium.

If they couldn’t be in New Orleans…these @DukeU students say cheering on the Blue Devils inside Cameron is the next best thing. It’s not filled yet, but they are expecting about 2,000 students by game time. 🏀 #abc11 #DukevsUNC pic.twitter.com/ZrjY4Wh624

But it's not just inside the arenas, fans have filled up bars and restaurants on Franklin Street in Chapel Hill and at places like Devine's Grill and Sports Bar in Durham.

Fans came from as far as Charlotte to support the Blue Devils and sport their Duke attire at Devine's Grill.

"I have been watching Coach K since he started at Duke. And going to Duke games, and so, it's a little bittersweet. If he doesn't win, I am gonna be sad and Carolina drives me crazy," Duke fan Vickie Keathly said.