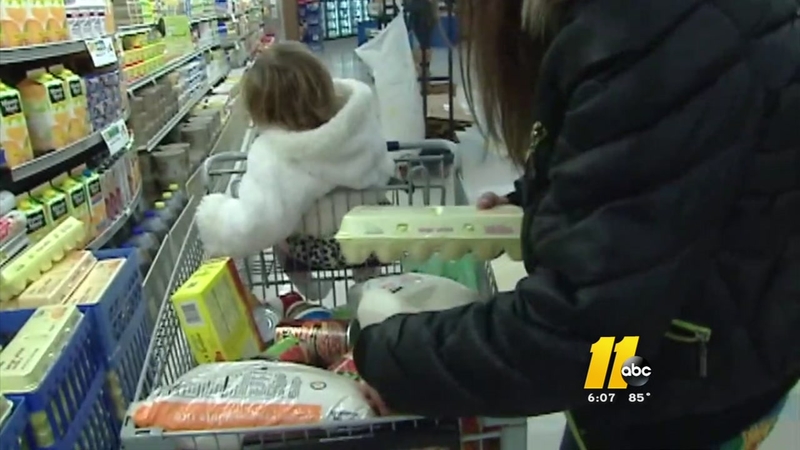 DURHAM, North Carolina (WTVD) -- Free and reduced lunch could be on the chopping block for thousands of North Carolina public school children. The reduction would be because of a provision in the Senate's budget plan. This provision does not save the state any money, but it could affect 50,000 children.

Rob Thompson with the advocacy group NC Child is raising concerns about that provision.

"I really only have one question, which is what's the purpose?" Thompson asked.

The provision would reduce the number of families eligible to qualify for SNAP benefits, also known as, food stamps.

During the recession, the state extended SNAP benefits beyond federal guidelines to help more families.

Under the proposal, 133,000 people would lose those benefits. Approximately 50,000 of them will be children.

"Families are working real hard right now in jobs that don't pay very much to make ends meet. These benefits are a critical component of helping families," Thompson said.

According to published reports, one Republican sponsor of the bill believes this provision would eliminate abuse and misuse of the program.

But opponents say SNAP should not be in the state budget, since it is a federally-funded program.

ABC 11 reached out to the bill sponsors, Sens. Harry Brown, Kathy Harrington, Brent Jackson, Ralph Hise and Louis Pate for an explanation or a statement, but received no response from any of them.

Some of the children who are potentially affected could risk losing free or reduced lunch.

"In addition to giving millionaires tax breaks 60 times larger than middle class families, Senate Republicans quietly slipped a provision in their budget to cut 100% federally-funded food-stamps for 133,000 North Carolinians. This includes 51,000 children, many of whose free or reduced lunch status is jeopardized with this action. This food makes a real difference for families who need it and doesn't cost North Carolina any state tax money. Lining the pockets of millionaires while going out of the way to make it harder for children to eat is just wrong."

Thompson said the provision is a loss for struggling families.

"We know that school is a place where these kids can always get a square meal, a nutritious meal and if we take that away from them at the same time that we take these food benefits that they get at home, you're really going to see an impact on the health of children in this state," he said.

Durham Public Schools Spokesperson Chip Sudderth said via email to ABC 11: "The students who are on the SNAP program automatically receive free lunch (Direct Certification). Currently, that number is 13,450 students in Durham Public Schools. With the discontinuance of the categorical eligibility provision, these families would be required to complete income applications in order to be eligible for benefits.

"DPS has 22,456 students who receive free and reduced priced meals. 13,450 are from the direct Certification rolls and the remaining 9,006 are from income applications."

So far, the bill has passed the Senate.