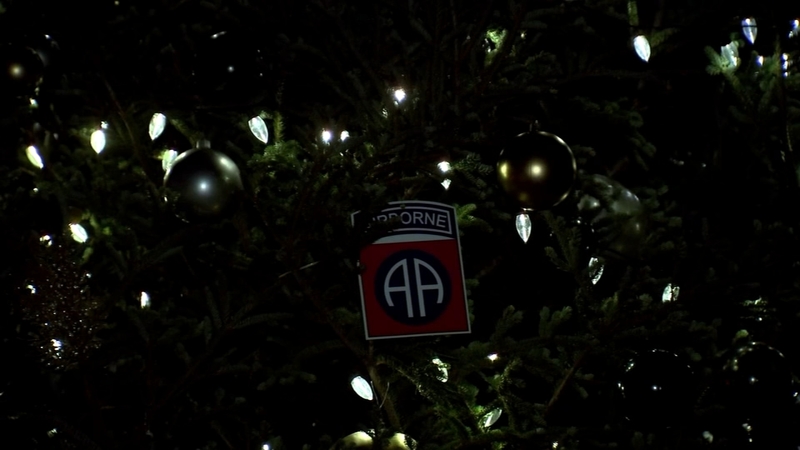 FORT BRAGG, N.C. (WTVD) -- Fort Bragg kicked off the holiday season with its 38th Annual Christmas Tree Lighting Ceremony and the honoring of a military family on Wednesday.

The yearly event looked a bit different this year, with COVID-19 restrictions in place: no crowd, Christmas festivities canceled, and the lighting ceremony being broadcast virtually.

This year, the military installation kicked off the event with the Golden Knights parachuting down, along with Santa Claus making an early appearance.

The change in plans didn't stop Fort Bragg from honoring Sergeant First Class Justin Dixon and his wife, Tawni. They became the 18th family to earn the title of "Family of the Year".

Lieutenant General Michael 'Erik' Kurilla introduced the married couple and their five-month-old son, Cameron, before giving them the honor of turning on the 20 foot Christmas tree.

"They've done so much for the soldiers and families of 3-319 and for our veterans here in the Fort Bragg community. This family always put people first," Lt. Gen. Kurilla said.

Sgt. 1st Class Dixon, who is a member of the 3rd Battalion, 319th Airborne Field Artillery Regiment, of the 82nd Airborne Division, developed a program to provide guided fishing expeditions to Wounded Warriors throughout North Carolina.

Meanwhile, Tawni served as a Soldier and Family Readiness Group Leader, dedicating countless hours to support 270 paratroopers and their families, during the no-notice deployment on New Year's Eve to Iraq. The couple were one of 29 families up for the award.

"I would say it's very humbling, uh, surprised, and, you know, it just goes to show people can make a massive difference, even though they originally don't think they will," Dixon said.

As the couple looks back at 2020, with Cameron being the newest addition to the family, they're thankful and know just how much need there is in the military community.

"Everyone that is in the military is also your family, and so, you should be considering every single person and what their needs are," Tawni said.