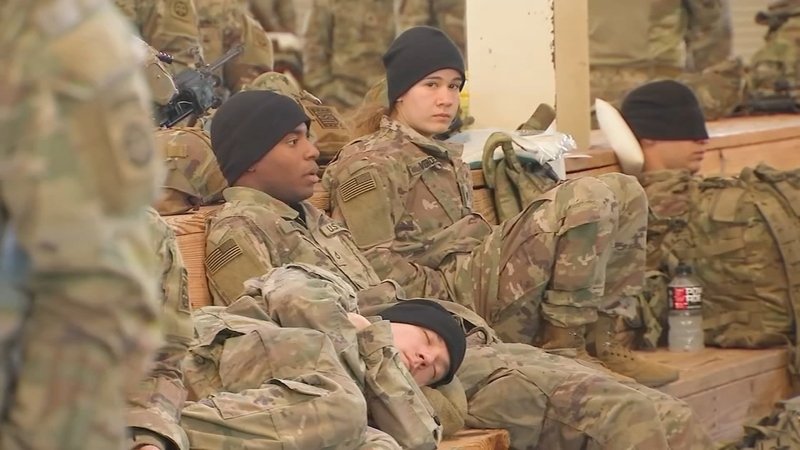 FORT BRAGG, N.C. (WTVD) -- Soldiers with the 82nd Airborne Division deployed to Poland on Monday afternoon. This deployment is part of a larger mission to support NATO allies. America's Guard of Honor is among some of the first boots to touch European soil in response to the threat of Russia invading Ukraine.

"I had to mentally prepare my family and my young ones. That's the hardest," said 2nd Lt. Jamall James, who has served more than 13 years.

Deployments are not new for James. Nonetheless, it is something he says his sons who are ages 8 and 3 don't understand.

"I just tell them daddy's going to work and won't be back for a little while," said James. "The little one really doesn't understand. He's asking a lot of questions. Why? I try to answer as best as I can."

NOW: Hundreds of @82ndABNDiv Fort Bragg soldiers heading to Poland in response to the threat of Russia invading Ukraine. For some of these brave men and women, this is their first deployment. I spoke with a few, including one woman from @CityofDurhamNC. pic.twitter.com/Gwirkk6oCs

Soldiers are spending Valentine's Day away from loved ones preparing for this mission. Spc. Paul Hairfield celebrated with his girlfriend during the weekend. He called her to say goodbye this morning.

"She is military as well so, she understands the 82nd. You've got to be ready to go. I was just telling her Happy Valentine's Day, I love her and I'll see her soon," he said.

This deployment is a first for many of the soldiers like Durham native Spc. Cassandra Verdejo.

NOW: @82ndABNDiv Fort Bragg soldiers deploying to Poland in support of NATO allies. More soldiers are departing over the next few days. I’ll have a report tonight from Fort Bragg starting at 4pm. pic.twitter.com/2ldpqFZa7m

Up until a few years ago, all combat arms were male, but she is one of few female infantrymen.

That means she is physically fit and has advanced marksmanship skills.

"There's not a lot of females in infantry, so you have to prove yourself," she said. "Physically and in the field, I can do whatever a man can do."

Her mother is nervous about this deployment. She spoke with her family before leaving. If there is a chance, her mother is watching ABC11, she wanted to pass along some sweet words.

"I love them and I'll miss them," said Verdejo.