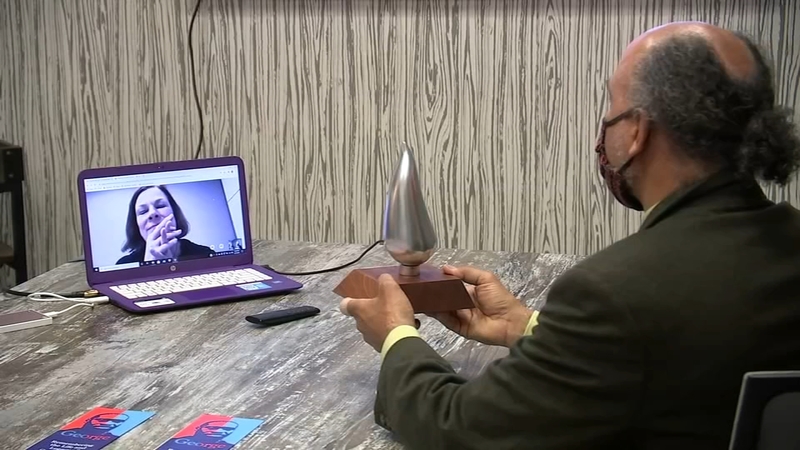 RALEIGH (WTVD) -- George Floyd's family were among those who gathered in the state's capital on Wednesday to discuss their vision for a memorial center to be built in his honor.

The George Floyd Memorial Center is an ambitious nonprofit, with plans to develop a scholarship fund and center focusing on education, training, advocating for justice and equality as well as a museum of urbanistic art.

"What we're looking to do is to impact the youth, starting here in Raleigh, in the capital city," said Thomas McLaurin, Floyd's cousin and CEO of the nonprofit. "We want to help them further their education and learn what it is to be a true leader in society."

George Floyd was born in North Carolina and has family members that still reside in the Tar Heel state.

Six months after Floyd's death and protests that followed across the nation, the family unveiled plans to establish a center in Raleigh.

Raleigh mayor Mary-Ann Baldwin expressed interest in the establishment during a virtual meeting.

"I have to tell you, we would be very interested in finding ways to work with you," Baldwin said.

Mayor Baldwin told ABC11 she and the city manager will continue to have discussions with city council members and potential partners. She said they want to be involved and are honored Raleigh was chosen as the future home of the center.

McLaurin said it could cost $10 to 20 million to build the center. The nonprofit is currently in the process of applying for grants and talking to large donors.

An exact location hasn't been determined but the family is looking in downtown Raleigh.
"We want to make sure that everyone knows that we're on the move to make a difference," said Roger Floyd, George Floyd's uncle.
EMBED More News Videos

Artist Phillip Harrison presented Mayor Baldwin with a plaque featuring a small teardrop sculpture. The plan is for a version of the sculpture to be placed at the center.

"This is a representation of a tear that did not need to have been shed," Harrison told her.

The Mayor got emotional, saying, "I'm speechless and honored."