Glenn Elementary off the list of schools to be taken over 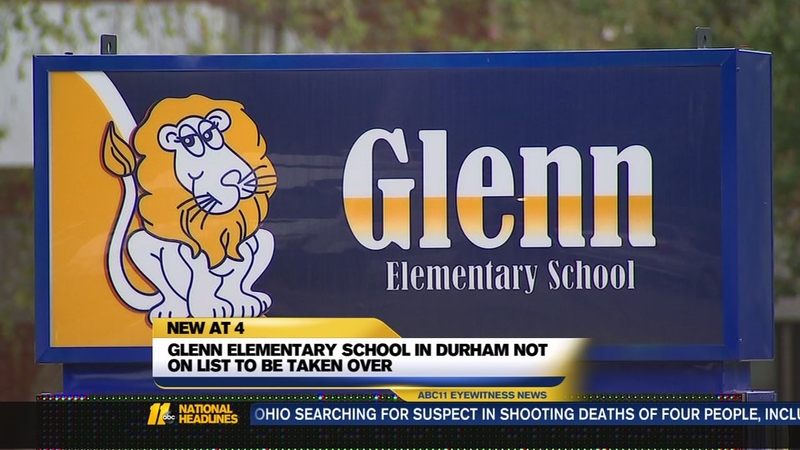 Glenn Elementary off the list of schools to be taken over

DURHAM, North Carolina (WTVD) -- According to NCISD superintendent Eric Hall, Glenn Elementary is no longer on the list of schools to be taken over or shut down.

Under this, schools that qualify would be operated under charter or education management organizations for a period of five years. Every year the schools would be monitored for improvement to then be returned to the local school district at the end of that five-year period.

Initially, the list of potential schools was at 48. That number was then narrowed down to six:

On Friday, it was announced that Glenn Elementary and Williford Elementary were not selected for the final phase for the NCISD.

"We are excited to hear that Glenn Elementary School is no longer being considered for state takeover," said Mike Lee, chairman of the Durham Public Schools Board of Education. "We are moving forward with our Restart planning and implementation for Glenn, Lakewood, and other schools needing additional support. We will continue to stand for our students, families, teachers and staff. Durham's schools are Durham's responsibility."

On Thursday, parents and students of Glenn Elementary went to the Department of Public Instruction in Raleigh with hundreds of signatures on a petition and passionate pleas to keep their school off the list.

"Communities, parents, and educators have been standing up for weeks to this state-led charter takeover of public schools approved by the General Assembly," said NCAE President Mark Jewell. "The big out-of-state money that led to this unproven and unaccountable school takeover scheme was exposed by the media this week. Instead of handing over our students to those who want to dismantle public schools and make big profits, our elected leaders should be investing in the resources it takes to help our students be successful."