Grandma on Raleigh couple accused of child abuse: 'They are criminals' 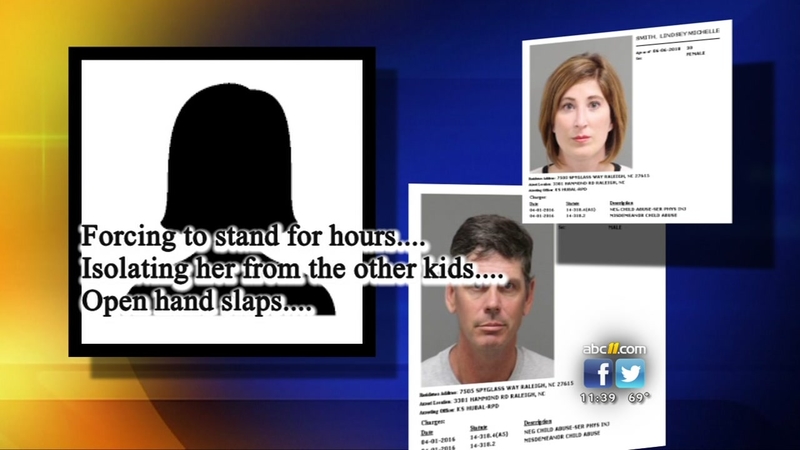 RALEIGH, NC (WTVD) -- A Texas grandmother told ABC11 on Wednesday night that two years ago, her daughter's children reached out to her from the family's home on Spyglass Way in north Raleigh to say they weren't being fed.

Tammy McKinney called from her Lone Star State home to have a pizza delivered to them.

But when one of the children Snapchatted a photo of themselves last weekend with a bruised eye, she called Raleigh police.

Days later, her daughter and son-in-law were in jail.

Harsh words from a Texas grandmother for her daughter and son-in-law accused in an extreme child abuse case in north Raleigh. #abc11 pic.twitter.com/EzPCNsoWn4

"These are criminals. They need to be prosecuted to the fullest extent of the law and serve time for what they've done," McKinney said.

The warrant also accused the couple of:

Authorities have ordered the couple to not have any contact with their child or any other minor.

They have also been barred from speaking to one another.

"I know what they have done. I have seen it with my own eyes. I have heard it with own ears," McKinney told ABC11 by phone from her home in Texas.

McKinney said she and her daughter haven't been on speaking terms since 2011 when Lindsey married Russell Smith.

"Now I know why; they weren't free to abuse the children if I were anywhere around," she said.

McKinney said Russell and Lindsey had five children, all from separate relationships, none together.

We asked the grandmother about the allegations of "mental abuse" toward the couple's 12-year old daughter.

"They are bullies. They make fun of the children and make them cry," she said. "Putting a child in a bathroom 24-7 for four days, a half bath ... withholding food, standing on one foot ... It's just torturous type things."

Russell and Lindsey Smith are both charged with felony child abuse.

Lindsey Smith appeared in front of a Wake County judge in court Wednesday afternoon, only speaking up to say she plans to hire an attorney.

Russell Smith was not in the courtroom but appeared via video conference to hear his charges.

"There's nothing I would like better than to come back and clear my name," Smith told the judge.