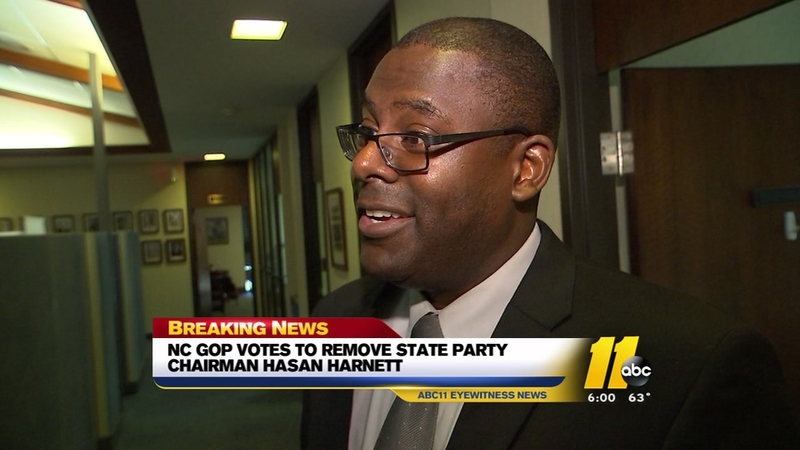 RALEIGH -- The North Carolina Republican Party's first black state chairman was removed from his post Saturday, the climax of months of conflict with other party leaders who recently reprimanded him after deciding he exceeded his authority and tried to crash a GOP website.

More than two-thirds of roughly 280 members attending the party's Executive Committee required to throw out Hasan Harnett voted to do so at the private, trial-like meeting in Raleigh that lasted several hours, according to meeting participants. Committee members earlier Saturday found Harnett responsible for violating the GOP's organizational rules and committing acts of "gross inefficiency."

"I am very confident that I'm able, I'm willing and I will successfully as your interim chair take you through our convention, the November election and we'll win," Hayes said during his nominating speech, which was open to the public. Hayes easily defeated two other candidates.

Harnett was out of the country Saturday on a previously announced business trip, according to ally Daniel Rufty, chairman of the party's 12th Congressional District. A text message to Harnett's phone seeking comment wasn't answered. Jim Womack, a Lee County party official made Harnett's case before the committee, said he wasn't allowed to comment more.

Some supporters were angry afterward.

"It was a kangaroo court. They did a charade of fairness," said Executive Committee member Raynor James of New Bern, a Harnett supporter. "I'm going to dust my knees off, dry my tears and continue the fight, but I'm mad as a hornet."

Saturday's meeting brings negative publicity for divided state Republicans seeking to retain their hold upon North Carolina government in November. Redistricting lawsuits, a tough gubernatorial re-election bid for McCrory and national negative fallout on a new law restricting bathroom use by transgender people and state and local anti-discrimination rules protecting gays and lesbians already are adding to the GOP's troubles.

Executive Committee members petitioned successfully for the special meeting Saturday after the party's smaller board of directors censured Harnett on March 20, limiting his powers and denying access to the party email.

Specifically, the Central Committee accused Harnett of unilaterally trying to lower registration fees to attend next weekend's state GOP convention without permission, criticizing other party leaders publicly and trying to interfere with the party's computer system. Harnett's critics have affidavits suggesting he tried to get a computer professional to crash the convention website and create an alternative site to collect convention proceeds.

Harnett said allegations against him were untrue or simply the result of differing views of party rules. A written rebuttal of the charges against him handed out to meeting participants by his "defense team" called the computer-related accusations "innocent activities performed by the chairman with absolutely no malice or impropriety toward the NC GOP or our convention delegates."

An angry and frustrated Harnett emphasized his race and place in state party history when he was locked out of his party email account in early March - before the Central Committee's censure of him - as part of what was called a server security sweep.

"I mean seriously, is this some form of ritual or hazing you would put the first black chairman of the NCGOP state party through?" he wrote to the party's executive director and treasurer. "Or is it because I am not white enough for you?"

Several of Harnett's predecessors - including Hayes - last week publicly expressed support for Harnett's removal, writing that he had "demonstrated time and time again that he is not capable of being chairman."

Hayes was chairman from mid-2011 to mid-2013, a period of great success for the state party as it expanded their advantages in the legislature and McCrory became the first GOP governor in 20 years. Hayes has ties to both conservative Christians and the party's business wing.

"I'm confident there's enough time that Chairman Hayes will do a good job and bring us all together," said state Rep. Jason Saine, R-Lincoln.