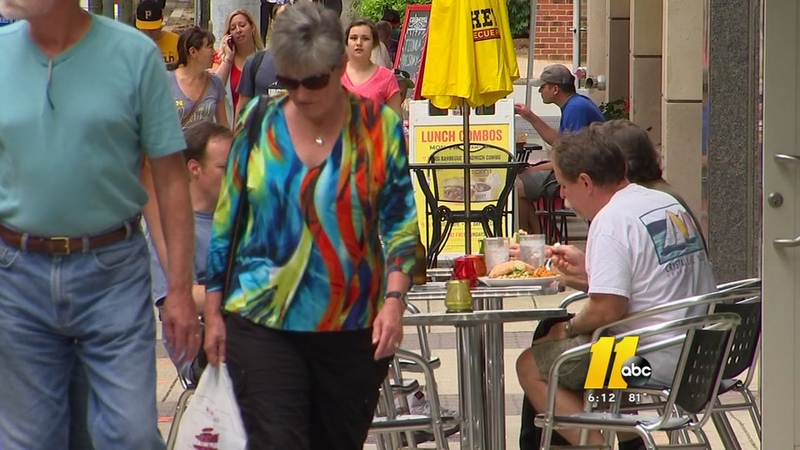 A closer look at HB2's impact on Wake County tourism

RALEIGH, North Carolina (WTVD) -- Many predicted North Carolina's travel and tourism would be negatively affected by the state's controversial House Bill 2, which dominated headlines last year and led to numerous boycotts of the state.

That tourism boom may come as a surprise to some. Dennis Edwards, president and CEO of the Greater Raleigh Convention & Visitors Bureau, helped explain the robust numbers.

"All indications are there's a lot of strong interest in this market," Edwards told ABC11. "I think we're finding every municipality in Wake County has a unique feature that might draw a certain individual or visitor."

Wake County visitors spent $2.4 billion last year that resulted in $242 million in state and local tax revenue. But how did this happen during a time that many claimed to be divisive?

"Most of our visitors are coming from in-state or Virginia...and HB2 wasn't really on their radar," Edwards said. He said HB2 had no impact on the county's leisure market mainly because the majority of Wake County visitors come from a 4-hour radius.

Edwards also told ABC11 that those same visitors were coming to Wake County prior to the issue of HB2 and the state's law wasn't going to stop them.

Figures provided by the GRCVB show the top 10 states that sent visitors to Wake County in 2016 were:


HB2, or the "bathroom bill" as many referred to it, did have some economic impact, particularly with meetings and conventions.

According to the bureau, 24 conventions backed out of Wake County in 2016 because of HB2.

"The good news is we were able to move a few of those groups to future dates," Edwards added. "So instead of canceling altogether, we convinced them to possibly move their convention to a future year to give us an opportunity to hopefully resolve any issues they may have with HB2."

According to Edwards, Wake County will feel the impact of lost conventions and meetings in 2018. What's unknown is whether those who canceled and did not reschedule for a later date will ever return to Wake County.

The bureau is teaming up with JLL to work on a plan to bring more overnight visitors to Wake County. It's called the Destination Strategic Plan for Wake County.

The goal of the plan is to identify nearly 20 areas of opportunity where GRCVB can be more aggressive in attracting overnight visitors.

He credits the increase in traffic to RDU's flights to Paris and London, and is looking to capitalize on that.

"Our organization now is starting to spend our resources and time over in Europe to work with the airlines ... tour operators and travel riders to tell our story and to let people know (Wake County) is a great destination."

Edwards and the GRCVB has an ambitious goal ahead of them. By 2028, he hopes Wake County becomes the premier destination of the South.

"I believe we can accomplish that," he said. His focus is in Wake County as a whole and not just Raleigh. "The word is spreading. People are starting to understand there are a lot of wonderful assets here."

New Jersey resident and Raleigh visitor, Alan Boardman, who was in town for a wedding enjoys coming to Raleigh but thinks more people should know about it. For instance, Boardman was unaware of HB2 when asked. "Just the notoriety that New York has, I don't know that a lot of people know what's going on in Raleigh," Boardman said. "So hopefully the word can get out."

"We believe that can be accomplished. We're never satisfied with the number of visitors we have," said Edwards, "But we know that we're probably going to need some additional assets to drive those additional visitors. If we can get another professional franchise here, and I think soccer is our best opportunity currently ... I think it will be a tremendous boost for not only downtown but tourism as well."