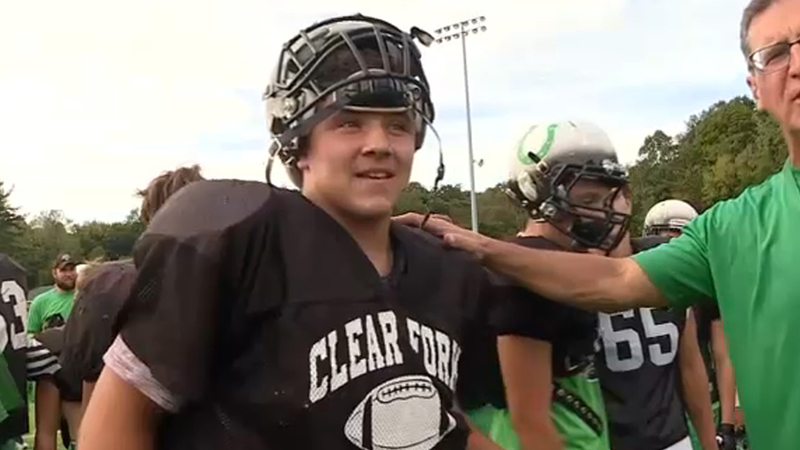 BELLVILLE, Ohio -- A 16-year-old football player somehow found superhuman strength when he lifted a car to rescue his trapped neighbor.

Zac Clark was doing yard work with his mother, Lora, this past weekend when they suddenly heard their neighbor's wife calling for help. She told them her husband was pinned underneath their Volkswagen.

Lora told WJW her son didn't hesitate to sprint over to their house to help.

"I guess the jack broke or slipped and the car fell on top of him from the waist up," Zac said. "Only thing I could see was his legs and he was struggling."

The 39-year-old man Zac saved asked not to be identified, but said he usually uses braces, but didn't that day. The bumper was crushing his chest with another part of the car pushing down on his head.

Zac positioned himself underneath the 3,000-pound car and lifted it off his neighbor, saving his life.

"He had a couple of cracked ribs and his face was messed up pretty bad, but the doctors told him if I wasn't there, then he'd be dead," Zac said. "I just thank God for putting me in the position and giving me the strength to do that."

Zac's football coach Dave Carroll said he was amazed when he heard about what Zac did but not surprised.


"He has just a huge heart," Carroll said. "Here's a young man who's been through tragedy himself with his father passing away last summer, and he didn't hesitate at all and saved somebody's life."

Zac said he was thinking of his late father as he lifted the car and wanted his neighbor to be able to spend his life with his family.

"I wanted to be able to save him to be with his family," the teen explained.

The man is now recovering at home.

Zac wants to become a firefighter when he graduates.

When Jayden Payne saw a family who needed help, he didn't hesitate to jump into the water.