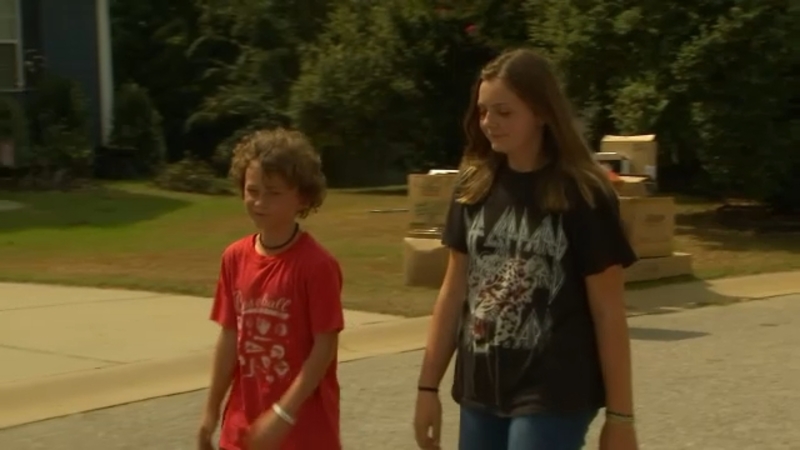 Hope Mills boy, 11, says he fought off attacker on way to school

HOPE MILLS, N.C. (WTVD) -- Some tense moments played out Tuesday morning in a Hope Mills neighborhood for the families of an 11-year-old boy and a 12-year-old girl.

"Chase runs in the door, and he's screaming 'there's somebody out there. He tackled me on the lawn,'" his father, Ray, told ABC11. "And I tell him to go upstairs."

While the children walked to school just before 7 a.m., a man wandering in the area near Celebration Drive and Pride Lane followed them.

Myah Barber, 12, said she noticed she was being followed a little too closely by a man wearing a shirt, shorts and socks but no shoes.

He soon began chasing her.

Nearby, 11-year-old Chase St. Peter saw what was happening and heard Myah scream. Chase told ABC11 that he told his friend to run into his house for safety.

It was then that Chase said the attacker pulled him to the ground, ripped off his backpack, and placed his hands around his neck.

"He had like grabbed me and thrown me to the ground and then he had me by my neck and was like patting me down as if he was looking for something," Chase said. "And he was like shh, shh, don't scream."

Chase was able to break free and run into his house with Myah. Meanwhile, neighbor David Lambert was on the phone with police, but he soon got more involved.

"I went to tackle him, he hit me on the left side around my temple," Lambert said. "Tackled him, knocked him down. He started getting up again. I grabbed his feet, knocked him down, and that's when the two officers jumped on top of him."

Amid the bustle, Ray heard his wife scream for help -- saying someone was trying to get the children.

"Once I got both kids in the house, and I knew everyone was upstairs, I knew it was on me and I was ready," Ray said. "I was sitting at the door with a pistol pointed at the door, and had somebody walked in the door, I would have shot them."

Authorities took Jones to a hospital for evaluation. He was charged with assault on a child less than 12 years of age and is scheduled to appear in court Nov. 3.

The case remains under investigation and deputies are asking residents of the Cypress Lakes Village Area to check security cameras and see whether any footage of this incident was recorded.

Sheriff Ennis Wright said he was "proud" of Lambert, the vigilant neighbor who sprang into action after recognizing that children were possibly in danger. Wright also said he was proud of the children who ran for help when they saw a stranger advancing on another child.

"All of the parties involved should be recognized for knowing about "Stranger Danger" and the importance of knowing how to respond. If it wasn't for their swift actions this could have turned out differently," the sheriff's office said in a release.

"Chase helped the little girl and getting her and being loud. And David being proactive and jumping in," Ray said. "It shows how a community can act and how we can, it's not just -- it's our responsibility as his parents -- but when the community does it as a whole, everybody's safer."

Anyone with information regarding this investigation is asked to contact Detective S. Odenwelder with the Cumberland County Sheriff's Office Special Victims Unit at (910) 677-5477 or Crimestoppers at (910) 483-8477.

Crimestoppers information can also be submitted electronically, by visiting http://fay-nccrimestoppers.org and completing the anonymous online tip sheet, or by downloading the FREE "P3 Tips" app.