'Whose side are you on?' Texas police chief slams politicians for stalling gun control legislation 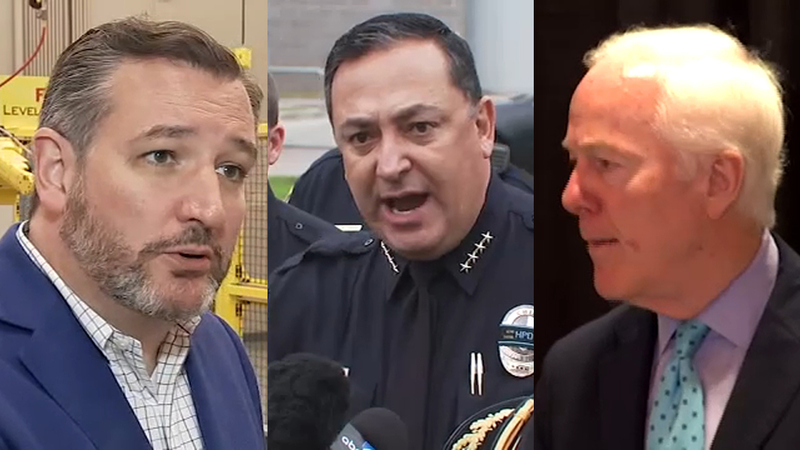 Chief Acevedo slams US senators in wake of death

"Make up your minds," Acevedo asked of GOP Sens. John Cornyn and Ted Cruz. "Whose side are you on? Gun manufacturers? The gun lobby, or the children who are getting gunned down in this country every single day?"

Brewster was shot and killed while responding to a domestic violence call on Dec. 8. He's the 13th law enforcement officer to be killed in the line of duty in Texas this year--the most of any state.

Despite being shot multiple times and mortally wounded, Brewster still called in the suspect's location and description, which ultimately lead to his arrest.

Acevedo has been a vocal supporter of the federal Violence Against Women Act. A provision of the bill, which passed in the U.S. House but is being stalled in the Senate, would close the so-called "Boyfriend Loophole." Federal law currently prohibits felons and domestic abusers married to or living with their victims from buying firearms.

"I don't want to see their little smug faces about how much they care about law enforcement when I'm burying a sergeant because they don't want to piss off the NRA," Acevedo said. "You start caring about cops, children and women and everyday gun violence. And that will be the last thing I say this week because the rest of this week is going to be about Christopher Brewster and his sacrifice."

In a private message to union members, Gamaldi wrote, "The fact that Chief Acevedo chose that moment to make a political statement on guns is nothing short of offensive and inappropriate."

Sen. John Cornyn's office blamed Democrats for walking away from negotiations on the bill and said Cornyn has worked to enhance the act. His statement did not mention the loophole at issue.

Sen. Ted Cruz's office similarly did not weigh in on the loophole, but said, "For many years, Senator Cruz has worked in law enforcement, helping lead the fight to ensure that violent criminals-and especially sexual predators who target women and children-face the very strictest punishment. Senator Cruz is currently reviewing Violence Against Women Act legislation in the Senate."

In this instance, it's not clear if the law Acevedo is talking about would've helped since under existing law, Arturo Solis could not legally possess or purchase any gun - and Solis knew it.

In August 2015, Solis was charged with assaulting a woman he was both dating and lived with.

These aren't Acevedo's first comments on gun control, but they are some of the most forceful, directly taking on Texas's U.S. senators in the midst of mourning.

Acevedo's boss, Houston Mayor Sylvester Turner, supported closing the loophole at a news conference just last week. On Monday, Turner appeared to suggest today may not have been time for politics.