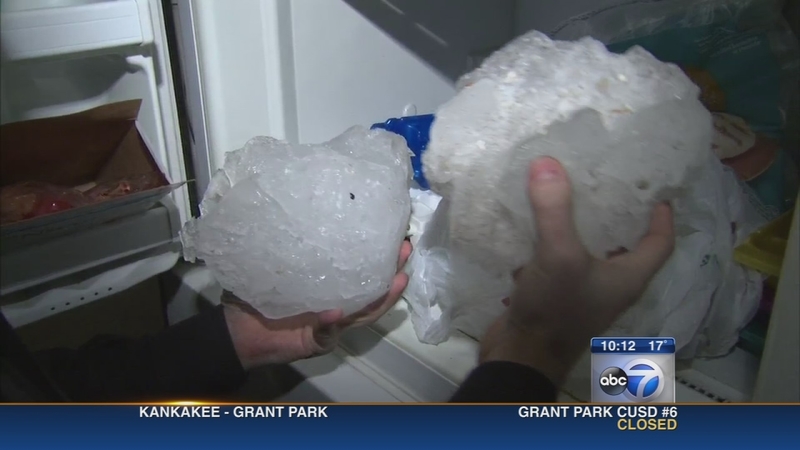 CHICAGO -- Ice fell from the sky and crashed through the roof of a man's home on Chicago's northwest side Thursday. Was it frozen waste dropped from a plane that flew over his apartment complex, or something out of this world?

Wherever the huge ice chunks came from, they caused a lot of damage and created a mystery that has the man perplexed and thankful they didn't land on top of his cat.

John Connors is keeping three ice chunks the size of bowling balls in his freezer in hopes they will help determine how and why they crashed into his apartment Tuesday around noon. The information technology specialist was at work when it happened.

"If I had been here, I would have been killed," Connors said.

His neighbor Doris Patiz was home at the time.

"I hear this terrible blast, I thought it was a gas explosion," Patiz said.

"I walked in and thought a bomb had exploded," Connors said. "I looked up and I could see the sky and planes."

Connors says the ice chunks crashed through the roof with such force, they shattered the ceiling beams - barely missing his cat. Connors was so shocked when he saw the damage, he didn't notice the frigid, artic wind whipping through the gaping hole in his ceiling.

"My chair was soaked with ice, just like, encrusted with ice and the rugs were soaked from the ice that had melted," Connors said.

One chunk was found in his bedroom, about 20 feet away from his living room.

"It's probably pretty rare that this is gonna happen again. So, I can't imagine. If that's the case, then I've already bought my lottery ticket," Connors said.

Connors' friend thinks the ice are megacryometeor, a term used to describe a large blocks of ice that seemingly fall out of the clear blue sky. There's also the possibility it's frozen liquid from an aircraft.

Regardless, Connors is hoping his landlord pays for the repairs.