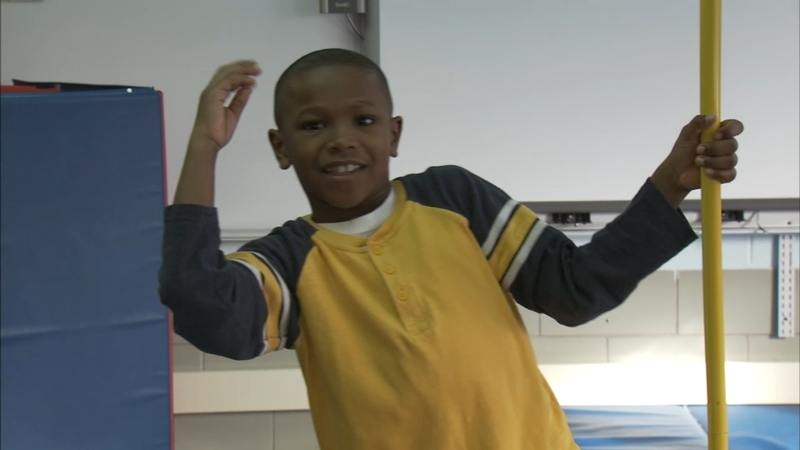 ROMEOVILLE, Ill. -- Jeremiah Morris, 7, has always had a lot of energy. But when he was about 1.5 years old, his parents say he stopped communicating verbally. He was diagnosed with autism and was almost completely non-verbal when the school year started.

But no more. Now he's talking all the time, and his parents could hardly be more pleased.

"I never got to hear him say 'mommy' until he was about five years old. Now he says it all the time!" said Miquel Morris, Jeremiah's mother.

He uses a device called an augmentative alternative device, or AAD for short. It has helped break through barriers to communication. It looks like a typical cellphone and it is for communication, but not by telephone.

"Communication is something we take for granted, but he started using it and pointing to pictures and then we realized we needed to get him one," said Kristin Anderson Morris, Jeremiah's school's speech pathologist.

Robert Hill Elementary School in Romeoville has more than 700 students and about a quarter of them have special needs. All of them get special attention, and many of them get one-on-one focus from specialists.

But Jeremiah's progress this year is so impressive, it earned him an award from the state and now the National Council for Exceptional Children for his use of technology.

Jeremiah also has the company of his comfort dog, Allie, in school. He will travel to Portland to receive the national award with his parents and younger brother. His parents are thrilled, and optimistic to see his growth in just the last few months.

"We didn't even know if he'd be able to talk. We didn't know what his vocabulary would be like," said his mother.

Jeremiah has never been on an airplane before, but he flies to Portland in the morning. When we asked him how he feels about that, he said, "happy." That's a feeling shared by everyone at his school.
Report a correction or typo
Related topics:
community & eventsromeovilleautismdisability issuestechnologyaward
Copyright © 2021 WLS-TV. All Rights Reserved.
TOP STORIES
Duke head football coach David Cutcliffe will not return next season
NC family abroad stuck in limbo as travel restrictions implemented
Vaccine inequity, hesitancy made omicron more likely: Scientists
For cop who shot Daunte Wright, will 'wrong gun' plea work?
RDU airport estimates 44,000 passengers on busiest day this week
FL teen may have been taken to NC by person she met playing video game
Show More
Fire at Pilot Mountain closes state park, burns 180 acres
Morrisville man missing for more than 2 weeks found safe at home
Arbery, Rittenhouse cases spotlight self-defense and vigilantism
Streets of Southpoint reopens Saturday after shooting that injured 3
Supreme Court set to take up all-or-nothing abortion fight
More TOP STORIES News