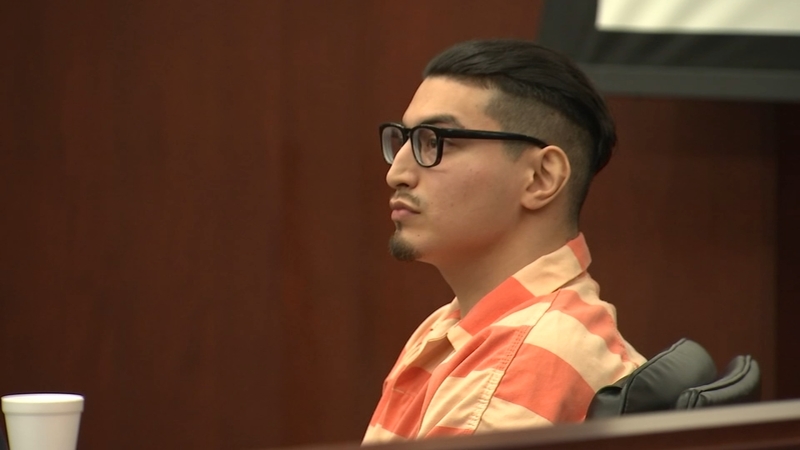 A couple was gunned down inside their home in a case of mistaken identity.

And the suspects later arrested were just 15 and 16.

The 15-year-old, Jonathan Santillan, now 22, was back in court Monday after the state appeals court threw out his two life-without-parole sentences in 2018.

"We're not asking you to let him out of custody," Santillan's new attorney Ryan Willis told the judge Monday at the Wake County Justice Center.

Instead, the defense asked the judge to re-sentence Santillan to life but with the chance of parole after 25 years.

Evidence during Santillan's 2015 trial showed he and another teen barged into the home of Samuel and Maria Mendoza because they thought a rival gang member still lived there.

The gang member had moved a year earlier.

"The circumstances of the offense in and of itself do not mean that Jonathan is beyond rehabilitation. Not just now at 22 but at 35 or 40 or beyond," Willis told the judge.

But the prosecutor said the circumstances of Santillan's prison record do mean he is beyond rehabilitation.

He told the judge that record shows Santillan is still involved in gangs inside prison walls and even has a new prison tattoo, the police code for murder.

"I can't think of any better evidence to show this court about who this defendant is and why he is permanently incorrigible and irreparably corrupt," said Wake County assistant district attorney David Saacks.

But Santillan's attorney pointed out the defendant was just a teen when he was sent to prison, thought he was there for life, and may have been seeking protection.

Since this case has already been sent back to court once, the Wake County Superior Court Judge Paul Ridgeway said he wants to get it right.

He noted that the North Carolina Supreme Court may rule on a very similar case soon.

"I'd like to have some guidance perhaps. So I may, I may choose to wait until the Supreme Court's had a reasonable amount of time to issue their decision," he said.
Report a correction or typo
Related topics:
wake countyinmatescrimesentencingmurder
Copyright © 2022 WTVD-TV. All Rights Reserved.
TOP STORIES
Winter storm moves out, refreeze possible overnight
NCSHP reports 200 crashes statewide, urges drivers to stay home
Dozens of RDU flights canceled through Monday evening
Monday events canceled, postponed due to winter weather
Why do we get freezing rain instead of snow or sleet?
FBI identifies hostage-taker at Texas synagogue
How to drive on snow, ice and get out of a skid
Show More
Expect more worrisome COVID variants after omicron, scientists say
After Biden's first year, the virus and disunity rage on
Novak Djokovic leaves Australia after court rejects visa challenge
Ukraine claims Russia behind cyberattack in 'hybrid war'
Hostages in N. Texas synagogue 'out alive and safe,' Gov. Abbott says
More TOP STORIES News