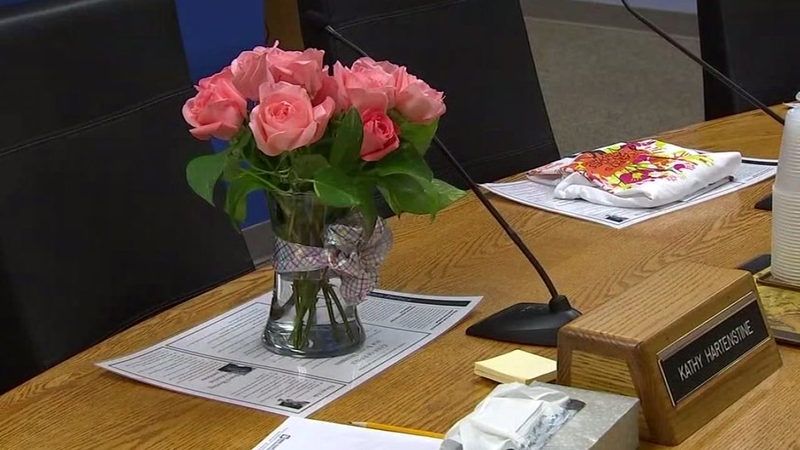 Battle over seat of school board member who died suddenly

CARY, N,C, (WTVD) -- It's a curious case, at least in Wake County. Board of Elections officials told ABC11 that they can't remember anything like this happening before.

Kathy Hartenstine died suddenly in September of complications from the flu. Then she was re-elected to her school board seat last Tuesday in a landslide. Now, it's up to lawyers to decide who gets to fill the position that represents a portion of the school district desperate for a seat at the table.

More than 28,000 people voted to re-elect Hartenstine to her District 7 Wake school board seat. Despite her death, she won more than 95 percent of the vote.

Attorneys for the Wake School Board and the Board of Elections continue to sort through who has the legal right to fill the late Kathy Hartenstine’s school board seat; the school board or voters? #abc11 pic.twitter.com/YaUh5iE90Q

"When I got (to the polls) for early voting, I was surprised that Kathy's name was still on the ballot. And it made me sad," Anne Robotti said.

We first met Robotti last month, as she and a small army of other District 7 parents in Morrisville were revolting against the school board's decision to open Parkside Elementary as year-round, not the traditional calendar they were once told it would be.

Many of the parents encouraged write-in campaigns -- hoping to fill Hartenstine's seat with a like-minded supporter.

"We were all throwing stuff together at the last minute and passing the names around," Robotti said. "I don't think a lot of people had a lot of information about any write-in candidate."

More than 1,400 votes were cast for write-in candidates. But the school board is moving forward to fill the seat itself, taking applications and conducting interviews with hopes to select a member by Christmas.

The school board's attorney, Jonathan Blumberg, told ABC 11, "the Board of Education has been operating with the understanding that it will be the body that fills the vacancy."

There's two different state statutes at play here -- one that gives power to the governing body to fill the position of a deceased candidate and another that says the next person with the highest number of votes wins.

"At canvass time, hopefully, there will be some clarity on this," said Wake County Board of Elections Director Gary Sims. "But no matter what, our job is just to make sure we have all the votes in and everything is accurately reported."

Wake County School Board member Kathy Hartenstine died suddenly in September but overwhelmingly won re-election last week. Tonight we're diving into the legal questions over who gets to fill her seat in a part of the district already at war with WCPSS. #abc11 pic.twitter.com/Oaiis2dQUH

Meantime, Robotti said that despite her complicated history with the school board, she trusts them to fill the seat with a qualified candidate. However, she readily admits that others in her circle of Morrisville parents favor a write-in candidate.

"A lot of people right now are saying let's seat the candidate with the most votes," she said. "But, I feel like everybody that's saying that thinks it's probably their candidate."

It's unclear whether any individual write-in candidate earned a majority of votes. That should be revealed Friday when the county Board of Elections certifies the election results.