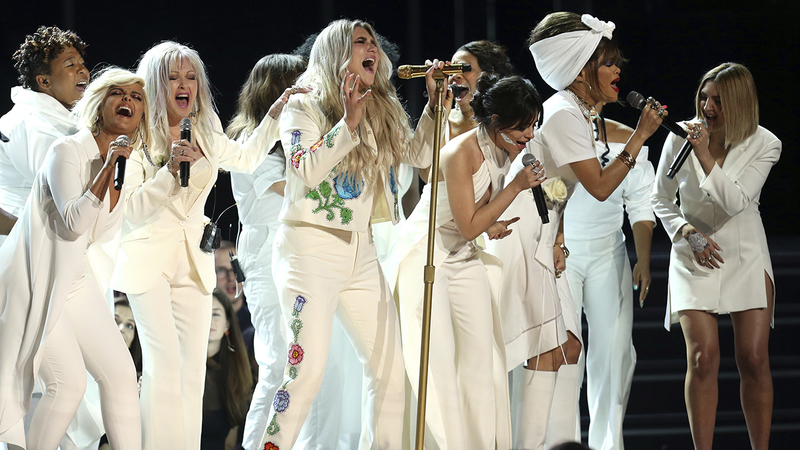 NEW YORK -- Kesha's poignant performance at the Grammys brought a defiant message of hope and healing for victims of sexual assault.

"You brought the flames and you put me through hell, I had to learn how to fight for myself," a visibly emotional Kesha, clad in white, sang to the world. "We both know all the truth I could tell. I'll just say this is 'I wish you farewell.'"

The song, from her third studio album, was released last year amid an ongoing and publicly messy breach-of-contract lawsuit in which Kesha alleged producer Lukasz "Dr. Luke" Gottwald raped and drugged her. Gottwald has denied the accusations leveled against him.

While Gottwald isn't mentioned by name in the song, the lyrics tell the story of a person who "found a strength [they've] never known" after being "put through ... hell." It also discusses themes of healing, suggesting that "maybe you'll see the light."

"It felt like an emotional raw victory for myself, one step closer to healing," Kesha said of writing the song. "I never could have known what would've happened these past few years."

"I needed this song in a very real way, I'm so proud and nervous and overwhelmed to be performing it at the Grammys on Sunday," she added. "If you need it, I hope this song finds you."

Several members of Kesha's star-studded backup band have had their own experiences with sexual assault or misconduct in the past. Lauper has said she was sexually assaulted by a male band member, Cabello has said she felt pressured to sexualize her act as a member of Fifth Harmony and Rexha has said record executives offered her massages and made moves on her.

The performance was just a part of the larger conversation surrounding equality and opportunity during the show. In an homage to their film peers decked out in black at the Golden Globes, many artists wore white roses to the show in support of Time's Up.