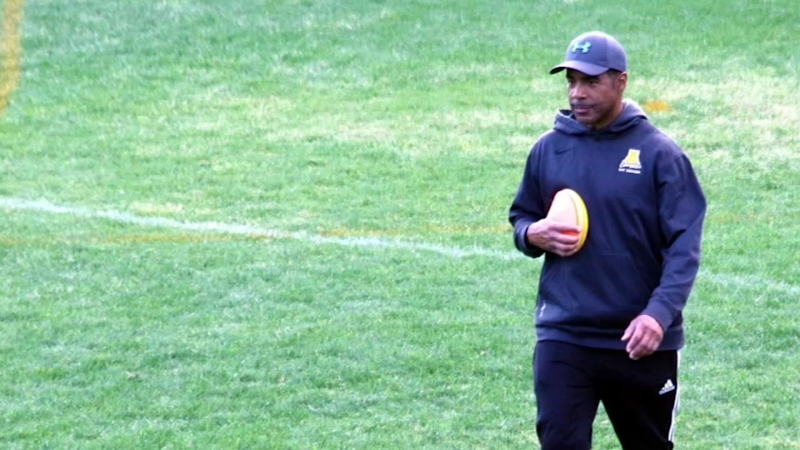 APEX, N.C. (WTVD) -- Right outside the Apex soccer field is a memorial with balloons, flowers and cleats, all to honor the legacy of a coach, a teacher and a friend, Kevin Todd, who died suddenly Wednesday.

Todd, 61, who was a teacher and also coached men's and women's soccer at Apex High School, had a "medical event" at school and later died at a hospital.

Todd was part of the Apex community for more than 30 years -- leading the men's soccer team to the 2005 state championship and the women's to the 2007 state title.

"I think he meant to me what he meant to Apex community as a whole," Moog said. "He was just this rock. Every time you saw him he made you smile."

"I think everyone needs to know that he was one of the most amazing and kind people and just so loveable," Apex senior Logan Styres said. "There was nothing you could hate about him. He dedicated himself to everybody else. He would get up at 5 in the morning we would get emails on gameday like, 'girls, it's gameday, get excited.' He was just so excited to be able to watch us play and to be able to be there for us. I think that he should be remembered as the most amazing person."

His players described him as calm and collected on the sidelines -- never the type to yell.

"At halftime of a game if we weren't doing well, he could quietly just say one sentence, and he would say it so calmly, and he would just say, 'I don't think we're playing great, I don't think the effort is great, and if it doesn't improve in the second half we will deal with it in practice," Moog said.

"I remember it was my senior year," Totten said. "It was our home opener, and I actually got a red card, and I got off the field and I stood next to him and he apologized to me about it, which didn't really make sense. He just felt bad that I was upset about it and didn't care we were playing a man down. He was just concerned if I was OK."

His players said that was one of his biggest goals -- to make sure his students and his players were OK.

"I was a freshman, and I was so nervous to try out, and I went to his room on the first day of school, and I was like, 'hi my name is Logan,' and he was like, 'oh my gosh, you're Kristen Styres' kid' -- that's my mom," Styres said. "He talked me through what was going to happen and how tryouts were going to go. He made it his main goal to make sure I was comfortable and not nervous. It was always his goal to be there for me since the first day of school and there for everybody."

With the men's and women's soccer seasons scheduled to overlap this season because of COVID-19, Coach Todd was determined to still coach both teams -- working out a way with the athletic director to make it happen.

"He cared for everyone way more than he probably cared for himself," Styres said. "At first, I was like I'm not going to play like there's no point. There's so many traditions that he started, and it's not just going to be the same for our senior year but there's no way that he would want us to not play. Something about Coach Todd is he loved Apex. It was his entire career. He loved the girls and everyone in the hallway. I'm definitely going to play to honor him."