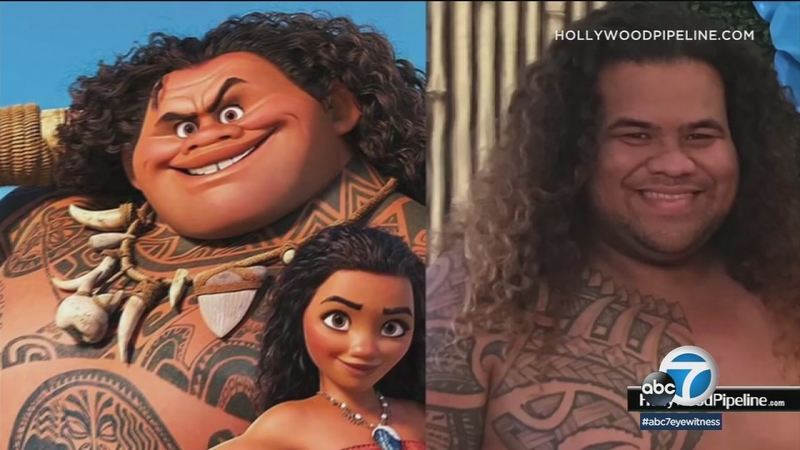 ANAHEIM, California -- A 24-year old Torrance man seemed like a natural to work at Disneyland, but the park withdrew his offer for hire and revoked his annual pass following a series of complaints.

Popularity spiked when Hollywood Pipeline posted a picture of Paala alongside the fantasy character.

"The resemblance is uncanny. That is his real hair. Those tattoos are real, and not only does he look just like Maui; just when I thought it couldn't get any crazier, he started singing," said Pipeline host Dax Holt, who met Paala at a children's party.

But just like Maui, a hero with flaws, Paala's star dimmed as complaints piled up.

Instead of the fabled demi-god, Soriano received a text message.

"My aunt is sick, she's in the hospital, she's not going to make it," reads Soriano.

Soriano said Facebook posts showed Paala at Disneyland posing with fans that same day, not at his aunt's deathbed.

"I did use that as an excuse. It wasn't true," said Paala on a RadioUnderland.com podcast.

Scores of victims had connected through social media, including former high school classmates. Some had loaned Paala money, others paid him for discounted park tickets and access to the park's exclusive Club 33, which never materialized.

Under pressure, Paala stated that he owed money to no more than 30 to 40 people.

"I messed up a lot and...I had to go out and acknowledge what I did, and I came to do this to let everyone know that I do apologize for my actions," said Paala on the Radio Underland podcast.

Doubtful victims recall a similar apology from three years ago. Former classmate Diamond Scott outed Paala on social media after he failed to pay debts from 2014.

Former classmate Cole Hockenbury told Eyewitness News Kyle pretended to work at Disneyland and offered to sell Cole two park tickets plus a parking pass for $100. The Disneyland passes never materialized, and it took Cole about a year to get the $100 back.

"He owned up to it but was still very sheepish about it," said Hockenbury.

Eyewitness News paid a visit to Paala's home after he failed to return phone calls and emails requesting an interview to set the record straight.

"I said what I had to say already. I already did all that, so I am ready to move forward from it," said Paala.

Paala may be more motivated now that Disney has canceled his annual pass and rescinded an offer to employ him as a general worker.

At about the same time as the podcast in mid-January, Paala appeared as promised at Janely Sandoval's party in Walnut.

But for others, the magic is gone. Monica Soriano said a real-life lesson has replaced it.

"The fact that I trusted somebody without even knowing them, just because everybody loved him," said the disappointed mother.